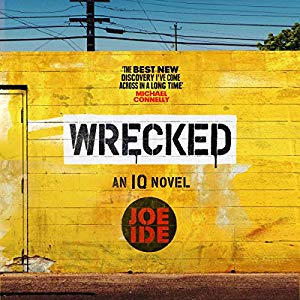 Written by Joe Ide, narrated by Sullivan Jones — This is the third crime thriller I’ve listened to by this astonishing duo, and familiarity has only heightened the pleasure in the experience. Author Joe Ide is a master at conveying distinctive personalities and subcultures with his words and narrator Sullivan Jones brings them vividly to life. Ide deftly weaves together his principal plotline and engaging subplots into a masterful tale of escape, revenge, pursuit, and retribution.

As in Ide’s previous two books, IQ and Righteous, the story centers on East Los Angeles investigator and righter-of-wrongs Isaiah Quintabe and his sometime friend – and in this book, new business partner – Juanel Dodson. Isaiah is called IQ not just because those are his initials, but also because he’s a brilliant strategist who saves situations with brainpower more often than firepower.

Neighbours in his low-income community need a burglar caught or an ex-husband warned off? Isaiah’s their man. A school club needs help with a bully? Isaiah again. Unfortunately, these clients pay him in roof repairs, cakes and pies, and a promised handknit reindeer sweater. Once, a live chicken. These exchanges do not pay the bills, and Dodson plans to change all that. Ide effortlessly provides slivers of insight into the East Long Beach community that create a real sense of that place.

In front of the local art supply store, Isaiah spots the woman he’s attracted to, Grace Monorova. Tongue-tied, he lets his gray pit bull Ruffin make the initial contact. Grace is great with the dog and always glad to see him. Her reaction to Isaiah isn’t nearly as warm. But she does call him one night to ask for help finding her mom, Sarah, missing for a decade. She pays him with one of her paintings, to Dodson’s disgust.

Although Isaiah can’t find any clues or electronic trail that would lead to Sarah, he soon learns there’s a 10-year-old murder warrant against her, presumably the reason she’s in hiding. The story behind that murder evolves over the course of the audiobook, even as a more immediate motivation for Sarah’s disappearance emerges. She’s the target of a trio of ex-military who participated in the atrocities at Abu Ghraib prison and the CIA operative who egged them on, Stan Walczak. Bad as the photos were that documented the depraved treatment of Iraqi prisoners, there are worse photos out there, and Sarah has them. She’ll sell them to Walczak for $1 million. He has the cash, but his scorched-earth modus operandi won’t let him buy them back. He wants her dead. Grace too, if necessary. And, if he interferes, Isaiah.

Walczak now runs a multimillion-dollar global security company and has infinite faith in his technology and the brutality of the three ex-military men who work for him. In a prologue that provides a peek at later events, the three skilled torturers are at work on a man they’ve captured, and it isn’t pleasant.

Walczak has plenty of resources to find the missing woman, and his first idea is Grace. Perhaps it is the nature of these adversaries that makes this novel more of an action thriller than IQ’s previous forays. While you might think he would have his hands full trying to find Grace’s mom and trying to find a way into Grace’s heart, given the tall stack of cards against him, the rest of life doesn’t let up.

For example, you know immediately that it’s a mistake when an old case of theirs comes back to haunt them, and Dodson decides to take care of it himself, without putting Isaiah wise. The old case involves the 21st century Malaprop of hip-hop, Junior, “who sounds like he swallowed a dictionary sideways.”

Author Ide ably captures the sometimes skewed thought processes of all his characters, including their humour and put-downs, and Jones delivers them with spot-on narration, Dodson’s character may be the sentimental favourite of them both. Dodson is a new dad, and jive-talking, slick operator though he is, baby Micah has obviously seized control of the household. The old case creates the opportunity to bring Dodson’s former girlfriend Deronda into the story in full whackdown mode. Dodson’s wife Cherise maybe more genteel than Deronda, but skilfully puts her husband in his place with just a few words.

Once again, Wrecked is a story packed full of interesting characters, hilarious dialog and make-or-break situations.

For more set in Southern California, see Jordan Harper’s award-winning debut, She Rides Shotgun, Nicolas Obregon’s Sins as Scarlet, Richard Helms’s Broken Windows, or pretty much anything at all by Michael Connelly.