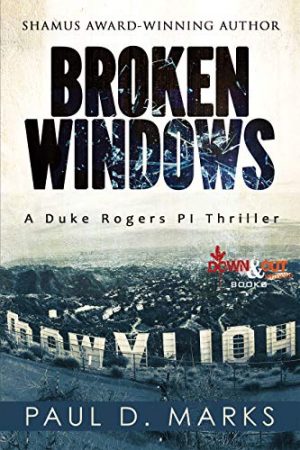 Written by Paul D Marks — Paul Marks’s second Duke Rogers PI thriller is a follow-up to the recently reissued White Heat, a Shamus award-winner in 2013. Rogers, principal narrator of this entertaining tale, has the sly humour of a modern-day Philip Marlowe and a similar penchant for attracting trouble.

Maybe it’s something about Los Angeles – too much sun, too much tinsel, too many people trying too hard – that makes it the perfect setting for so many great noir novels. In a quintessential Los Angeles move, the prologue describes the suicide of an aspiring actress who kills herself by taking a dive off the iconic Hollywood sign. Her death hangs out there, disconnected, waiting for private detective Rogers to reel it into the story.

Rogers is a famous guy around LA, famous for a detective, anyway. He’s the one who solved the murder of up-and-coming starlet Teddie Matson, recounted in White Heat. The frequent acknowledgements of his success rub salt in a wound that has not healed. Though he caught Teddie’s killer, people don’t know that it was he who mistakenly told the killer how to find her.

Out for a stroll with his new dog, Rogers encounters the neighbour’s housekeeper walking her employer’s Yorkies. Marisol Rivera is young, pretty, Mexican and illegal. And she has a problem. Her brother’s been found dead. The police say un accidente, but Marisol believes it was murder and that they’re reluctant to invest time and effort in the case because Carlos, too, was undocumented.

Rogers wants to help her, pro bono because she cannot afford him and because he believes bad things happen not because of bad people but because of those who don’t do anything about it.

Eventually he persuades Marisol to let him help her, but wading into a highly charged political swamp is a good way to encounter alligators, and soon there’s a second body to account for. This time it’s a man high in the bureaucracy of the Catholic church. When he turns up dead shortly after visiting Rogers, the local police figure him a person of particular interest. Though relations with the pair of detectives ready to cuff him are bad, this PI has established solid contacts with a number of other police operatives in the city and county who are willing to help him out from time to time, at least until he gets himself busted.

Marks writes with an easy style that carries you through the story and creates engaging characters to spike your interest. His Los Angeles is familiar and believable. He softens Rogers around the edges by giving him a new dog needing care, a friend who has earned and receives unswerving loyalty, and a woman he would like to reconnect with. She’s the sister of the dead starlet Teddie Matson, and his guilt over Matson’s death keeps him from picking up the phone. Yet he obsesses about her. Perhaps a bit too much.

Marks places this story in the broader political context of California Proposition 187, a 1994 ballot initiative aimed at curbing the flow of illegal immigrants into the state and denying them public services. Characters in the story represent various stakeholder groups and positions that resonate with the vicious public policy debates of today. Rogers’s best friend Jack – like Rogers, a former Navy SEAL – is strongly anti-immigrant, which enables some interesting discussion. But this is, of course, not a political essay, but a mystery. In the quest for Carlos’s killer Rogers must peel back the masks worn in public by these various elected officials and community leaders – including those in the church. It’s always a treat to see hypocrisy stripped bare, and Rogers finds that what these stalwarts say to their constituents about immigration is more a reflection of self-interest than principle.

Part of the story is told from the point of view of Eric Davies, a disbarred lawyer whose downward spiral has landed him in a cockroach-infested apartment in Venice, California. He is out of luck and out of prospects unless someone answers his desperate advert saying he will do anything for money. Someone does. The writing of Eric’s chapters is very close in. You are inside his addled, frustrated head and hope that when the time comes, despite all indications to the contrary, he will do the right thing. Rogers has a job of work to fit these irregular pieces together, including the suicide fall from Hollywood grace.