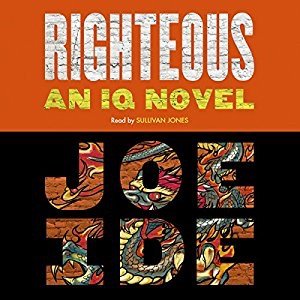 Written by Joe Ide, narrated by Sullivan Jones — Righteous is Joe Ide’s second crime novel about Isaiah Quintabe, a young black man living in tough East Long Beach, California, who’s really good to have around if there’s trouble. Not that he’s a crack shot or a kung-fu warrior. Quintabe gets people out of jams large and small by sheer brainpower. Ide’s debut novel, IQ, the first book in the series, won Anthony, Macavity, and Shamus awards and was widely considered one of the best books of 2016, and one of the best audio books of the year as well. Readers and listeners eagerly awaited a follow-up and won’t be disappointed as Ide and Jones reconnect.

You don’t need to have read IQ to appreciate Righteous, though if you know the earlier book, you’ll happily see the return of a number of its characters, so vividly brought to life by narrator Sullivan Jones. None is more welcome than Quintabe’s sometime partner Juanell Dodson. The fast-talking, wise-cracking Dodson is forever hoping to outthink the younger man, but Quintabe stays two steps ahead. Ide writes (and Jones delivers) the Dodson character with much humour and affection and gives him girlfriends with attitude. Impending fatherhood has given him a veneer of responsibility that shatters under the slightest pressure.

Quintabe was 17 in the first book when his adored older brother Marcus was killed in a hit-and-run, leaving the teenager with no family and on his own. Righteous takes place eight years later, and though he gave up the search for the car that killed Marcus for a while, now he’s found it. With the few clues inside, he rethinks the events of that deadly afternoon. He concludes Marcus’s death was not a random traffic fatality, it was a hit. But why? And who?

Meanwhile, in Las Vegas a young Chinese woman named Janine Van is trying to build a career as a DJ but is being held back by her deadbeat boyfriend, Benny, whose only skills are motocross racing and gambling away money they don’t have. He’s gotten them way over their heads, and he’s behind on the vig with some rough characters more than willing to hurt him and Janine too. Benny is a whiner, and not even a brilliant narrator like Jones can make him very appealing, though the sassy Janine loves him. Here’s her exit line after jockeying a set at a club, which gives a sense of Ide’s inventive writing and the verbal challenges Jones is up against: “Whassup my people! This is your queen kamikaze, the heat in your wasabi, the gravy train in the food chain, the champagne in the chow mein, I’m DJ Dama, baby, that was my set, and I’m gettin’ up outta heeerre, PEACE!”

Out of the blue, Quintabe is contacted by Marcus’s ex-girlfriend, Sarita, now a lawyer at a high-priced law firm. Quintabe had quite a crush on her, still does, and she wants to meet. His hopes raised (the one illogical thought he pursues), but what she wants is for him to find her younger half-sister, who’s in trouble in Las Vegas where she hangs out with her screw-up boyfriend. You guessed it, Janine and Benny.

What sounds like a simple rescue operation becomes terrifyingly complicated, as Ide deftly sets several crisscrossing plots in motion. Quintabe has a run-in with a Mexican gang, the Sureños Locos 13, and they’re out to get him. Janine and Sarita’s father seems a respectable business man, but somewhere in the background are human trafficking, prostitution, and the murderous Chinese triads. The ethnicities vary, but these characters are alike in their mastery of the entertaining verbal insult. Somehow Jones keeps them flying and clear to listeners, regardless of shifting accents, even the Chinese gang members’ bizarre attempts to sound like black gangsters.

Ide provides a break from these warring factions with Quintabe’s solo efforts to find his brother’s murderer. His prime suspect is Seb Habimana, a dangerous East African man who lost a leg in the Hutu-Tutsi wars. He uses a cane he made from the legbone of the man who maimed him.

As with the previous book, Sullivan Jones’s narration is flawless. You get Benny’s whine, Dodson’s jive, his girlfriends’ attitude, the Chinese gang-bangers, the soft consonants of Seb, and the Mexicans’ distinctive cadence. Jones hits every comedic and ironic note, making music out of it all, and never misses a beat. His audio version of IQ was a finalist for an Audie Award in 2017, and if his name is familiar, he appeared in Hulu’s political thriller series The Looming Tower earlier this year.

We have previously reviewed Joe Ide’s IQ, as well as another recent award-nominated book from inside southern California’s gang mayhem, Lola, by Melissa Scrivner Love.

By Sonja van der Westhuizen
Translated by Nick Caistor — It’s been almost a year since we’ve reviewed the first of Olivier Norek’s The Lost and the Damned. The French author’s debut in English was one of our top crime fiction novels of 2020. The question is can he match…
Features