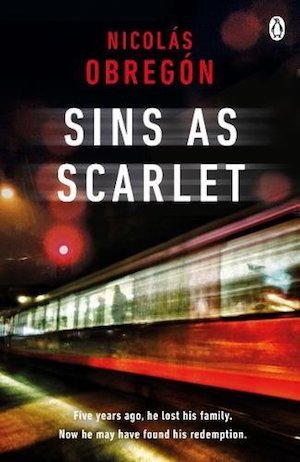 Written by Nicolas Obregon — Detective Kosuke Iwata is back, this time back in Los Angeles, after escaping a hell of his own making in Japan. The problem is Iwata doesn’t feel at home anywhere, and no matter how much he runs there are some things in his past that he can’t escape.

Two of those things from his past coming back to haunt him are his mother and his mother-in-law. His mother moved with him to California when he was a boy, and is trying to convince her son to settle down with a nice Japanese girl, even as she ignores her own past in Japan. Iwata’s mother-in-law’s wounds are much fresher; she blames Iwata for her daughter’s suicide in Japan, and now that he’s back in the US and working in Los Angeles as a private investigator, the mother-in-law comes to him demanding that he find the person who killed her other daughter, a transgender woman named Meredith, who was found dead on the railway tracks by Skid Row.

The city Iwata moved to with his mother is Torrance, on the southern beaches of Los Angeles county. It’s an area lots of Japanese people have settled in. Despite growing up with them, Iwata feels that he never fits in no matter where he ends up. Throughout Sins as Scarlet it feels as though he is just barely scraping by, with depression and inertia holding him down as memories of his years as a detective in Japan haunt him. Despite the feeling that Iwata isn’t at home no matter where he is, Obregon’s careful description of the minutiae of the City of Angels is one of the highlights of Sins as Scarlet. In fact, each of the novel’s settings, from modern-day Los Angeles, to borderland Mexico, to 1975 Tokyo, are beautifully evoked through the author’s careful eye.

Sins as Scarlet has enough setting and plot for two or three books, which is perhaps what it should have been. Obregon tackles some big issues, including immigration, homelessness, domestic violence, family relations, transphobia, drug trafficking, human trafficking and the trafficking of vital organs. Each alone would be enough fodder for a novel, but Sins as Scarlet scratches the surface of each issue not leaving enough time to delve into them properly. As a result they often get brushed aside as the story moves on and what should have been a major focus becomes throwaway in order to advance the plot.

The plot itself is intricate, yet despite all the changing viewpoints and sliding timelines Obregon’s creation is fast-paced and riveting, complex yet easy to follow. The plot arcs are wide, with the brutal murder of a Mexican woman as she crosses the border into the US only becoming significant in the final chapters, as Iwata himself struggles to get back into the country after earning the wrath of a Mexican drug cartel with his relentless investigation. In a similar way, Nozomi Iwata’s flashbacks to her life in Tokyo in 1975 only come to bear in the final chapter, when the identity of Kosuke’s father and the truth about his childhood in a Japanese orphanage come to light.

Despite some of these questions going unanswered at the end, it’s not clear where Obregon will find the material for a third book about the inspector turned private detective Kosuke Iwata. According to the author’s website it’s on the way, and based on the author’s pedigree it will almost certainly be a meticulous police procedural, and definitely something to look forward to.

For another police procedural set in the deserts of the southern US, see High White Sun.