Paris in the Present Tense 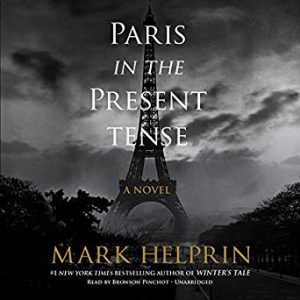 Written by Mark Helprin, narrated by Bronson Pinchot — For those days when you just can’t face another serial killer and would like a crime novel more akin to eating a warm and soothing dish of crème caramel, this literary novel, which includes crimes great and small, may be just the thing. It’s pleasantly reminiscent of the best-seller A Gentleman in Moscow.

In both books, an elderly man of old-school culture is coping quite well, thank you, due to the habits of a lifetime and despite the political shifts that destroyed his world and continue to threaten it. These same habits have unexpectedly prepared both books’ protagonists for a brave enterprise on behalf of someone they love. With Mark Helprin’s Paris in the Present Tense in audiobook format, there is the additional pleasure of Bronson Pinchot’s narration, his French accent as musical as the book’s hero, Jules Lacour.

Lacour is a Jewish cellist, living and teaching in Paris, and nearing the end of his career. He’s a romantic, falling in love rather easily with beautiful women, even ones he briefly sees on the street, and knowing nothing will come of these infatuations. For many years, he’s lived in a fabulous apartment owned by an aging industrialist, also Jewish, who appreciated the opportunity to make the cellist’s life easier. But the old man is retiring, and his philistine sons plan to sell the house. Lacour must move, and his circumstances will be drastically reduced, as the music school he works for is gradually taking away his teaching assignments and pupils.

The impending domestic disruption prompts many reflections on his past life – his happy marriage to Jacqueline, and his unhappy early childhood. Born during World War II while his parents were hiding in an attic in Reims, his first years were lived entirely in whispers. Only once did he hear his father actually play the cello, though many times he had mimed playing without holding a bow. That was the day the Nazis were pulling out, with American forces hot on their heels. But a Nazi officer heard the beautiful music, insisted on finding the musician, and, after years of hiding, the family was found. The young Lacour saw his parents shot to death in the street. A soldier hit him hard on the back of the head, but he survived.

Lacour’s reflections on Paris itself, in which he maintains his longstanding habits of staying strong by walking and rowing on the Seine, are like a love letter to the city. He has a married daughter, whose young son Luc suffers from leukemia. Lacour desperately wants her to take the boy to Switzerland or the United States for treatment, but neither the daughter and her husband or Jules himself can afford it. He’s also of the growing opinion that life might be better elsewhere, when he sees evidence of the reemergence of the fascist political elements that shattered his childhood. Lacour’s concerns on all these fronts are expressed most sincerely.

That past is never far away. When walking along the river one evening, he sees three young men shouting anti-Semitic slogans and attacking a fourth man wearing a yarmulke. Lacour doesn’t hesitate to intervene. To their surprise, the spry old man manages to kill two of them, while the third runs away, as does their intended victim.

The deaths occur precisely at the border between two districts of Paris and the story now becomes something of a police procedural, with a detective from each of the districts trying to figure out how to work together. Narrator Pinchot captures their distinctive accents and the humour in their cobbled together partnership. Their efforts are nonetheless dogged, with the usual bureaucratic mishaps of a police procedural. Despite an appalling lack of clues, they stay on it.

Meanwhile, Lacour is presented with the opportunity to write a jingle for a big US financial services company (telephone hold music), and the way he and the American who recruits him talk past each other is highly entertaining, as is the contrast between Lacour’s cultured quietness and the exaggerated crassness of the American. The jingle assignment is practically an insult, but it will pay so ridiculously well that it may help him get Luc into treatment at last.

But the situation does not evolve as Lacour expects, the police are suspicious, and he must try to devise a clever new crime that is both undetectable and foolproof in order to get his last wish. Although the novel moves at a stately pace, Pinchot’s narration never flags. Treat yourself!

For more from the City of Light, you might want to read up on Maigret’s Paris or try Wendy Hornsby’s recent Number 7, Rue Jacob.