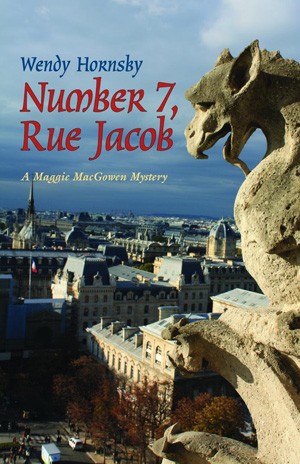 Maggie is an American, almost 40, dedicated to her career and engaged to delightful Frenchman Jean-Paul Bernard, about a decade her senior. He says he’s just a businessman but she realises it is something far more consequential. Author Hornsby’s teasing regarding the actual professional responsibilities of Jean-Paul adds to his intriguing character.

Maggie is content to let him keep his secrets, and she is in Paris to rendezvous with him and to find out whether she can drum up some documentary film business there. She aims to stay at number 7, rue Jacob, in a flat inherited from her biological mother, a Frenchwoman she never really knew and part of a family she didn’t know she had.

As it turns out, the entire building is hers. It was originally owned by a now-defunct convent, and in its cellar is a valuable library of books that she, by rights, also owns. They books that the diocese, the Vatican, le Louvre and perhaps one or two other parties want. Among them is a cache of rare 17th century Russian illuminated manuscripts of almost inestimable value.

Before Maggie can settle into the apartment, Jean-Paul sends an urgent summons, quickly followed by a delivery of first aid and other emergency supplies from the local pharmacy. She’s to take these supplies to him in Venice and, in making her travel arrangements, he warns her to use burner phones and cash only, no credit cards – nothing that can be traced.

When she reunites with Jean-Paul, she learns he was injured leaving a Doctors Without Borders camp in Greece when a drone dropped a bomb in front of his vehicle. One arm is in a sling and wounds to his face have been stitched up. Worse, he let a Swedish nurse use his hotel room in the nearby village, and she was murdered in her sleep.

Despite Maggie’s precautions, she and Jean-Paul soon realise she is being followed. The author then sets up the cat-and-mouse game with a set of shadowy pursuers that takes the pair from Venice to Ravenna and across Italy.

Hornsby’s novel is a cautionary tale about how easily people’s location can be tracked these days. A Taiwanese hacker hired by a dodgy security agency is using social media to ask people to ‘find this couple’, and Maggie and Jean-Paul see photos of themselves taken by dozens of casual passersby appearing online. When the hacker’s instructions change from ‘find them’ to ‘stop them’ and a reward is offered, it’s as if Maggie and Jean-Paul are the object of a terrifying version of Pokemon Go. Anyone with a cell phone can potentially expose them.

But what do the pursuers want? Are they after Maggie because of the film exposé she just finished about unexploded land mines? Or are they after Jean-Paul? Or is 7 rue Jacob itself the target, with its hidden library of precious illuminated texts? For quite some time, they do not know, and even when the big reveal is made there’s something insufficient about the motive for the potentially deadly attack on Jean-Paul and the murder of the nurse.

That aside, Hornsby has a clear writing style and creates significant tension around the threat to Maggie and Jean-Paul, as well as a warm and sexy relationship between them. Alongside the thrill of the chase, Number 7, Rue Jacob unravels the complicated family dynamics attendant to Maggie’s unexpected inheritance.

For more crime fiction with technology at the fore try anything from Craig Robertson’s The Photographer to 13 Minutes by Sarah Pinborough or even The Girl with the Dragon Tattoo by Stieg Larsson.