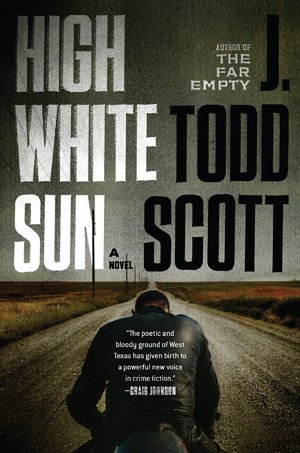 Written by J Todd Scott — High White Sun is a solid follow-up to J Todd Scott’s 2016 debut hit, The Far Empty. Again set in the West Texas Big Bend country and with some of the same characters, in the new book Sheriff Chris Cherry and his deputies become embroiled in an especially troubling case. It’s one in which the methods employed in the standard police procedural are woefully insufficient…

A prologue set in 1999 recounts the murder of Texas Ranger Bob Ford, and the long echo of that death reverberates through events of the current day like the howling of the wind off the distant Mexican mountains. Ford had a young son, Danny. Fifteen years later, when the main story is set, Danny vividly remembers his father’s funeral and being handed the dead man’s badge. He still holds onto it.

In the small town of Murfee, Texas, Sheriff Cherry remains uneasy in his job, even though it’s a year or two since the events recounted in The Far Empty catapulted him into that role. He has some high-quality backup. The young Mexican-American woman he hired, America Reynosa, is turning out to be a first-class deputy. A retired Midland, Texas, detective, Ben Harper, provides the voice of experience. His other deputies are sincere, if not world-beaters, though they’re one man short. A speeding car injured their newest recruit on his first day on the job. The young Mexican driver is in jail, though something odd passed between him and America out on the highway.

When a popular river guide is murdered, suspicion lights on a group of new arrivals, pegged by everyone as bad actors. Covered in white supremacist tattoos – prison ink – they’ve set up camp some miles outside Murfee at a wide spot in the road aptly named Killing. Head of this clan is an obvious hard case, an ex-con named John Wesley Earl. Among the group are Earl’s brother, two sons, a couple of girlfriends, and several cousins and hangers-on.

Author Scott dives deep into Earl’s history and way of thinking, so that, while he never becomes sympathetic, you certainly understand why he behaves as he does and how little regard he has for anyone else, including his family. He’s a man with few chances left, and he’s going to take them, starting with the large taste of freedom he gets from his solo early morning motorcycle rides through the desert, dust flying. There’s a knack to making bad guys three-dimensional, and Scott has it.

A strong sense of foreboding hangs over the story like the clouds on the horizon that never seem to bring rain. In chapters told from Cherry’s point of view, you see how strong is his sense of responsibility for the safety of the people in his county, and how a confrontation with the Earls is inevitable. Cherry hopes the investigation of the river guide’s death will give him the excuse he needs to boot the Earl clan out of his county or into the lockup.

Unfortunately, Sheriff Cherry’s priorities aren’t shared by the FBI. Agent Austin Nichols wants the sheriff to keep his hands off the Earl gang in order to protect a confidential informant he has among them. Meanwhile, now out of prison Earl can start profiting from the drug trafficking ring he has set up, while his son Jesse wants to set up a white supremacist community in the desert. For that he needs guns and money…

These are just some of the threads that help build a page-turning plot. The Earl crew has a lot of dangerous secrets. And worse, Deputies Reynosa and Harper are keeping secrets from the sheriff. When everything is eventually revealed, the resulting storm could destroy them all. Scott’s writing is so vivid, you’ll feel like you witnessed the whole bloody mess, up close, in person.

See also The Bone Tree by Greg Isles, also set in the American South, or Nowhere by Roger Smith, set in South Africa.