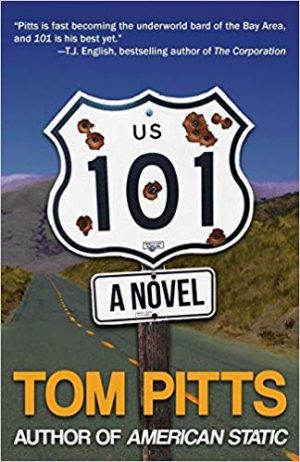 Written by Tom Pitts — Book publicists are fond of the awkward adjective unputdownable, but in the case of Tom Pitts’s new California crime thriller, this enthusiastic description is wholly justified. Those familiar with the state will recognise 101 as the highway that runs the length of California from Los Angeles – where it’s part of the world’s busiest and most nightmarish freeway interchange – north to the Oregon border and beyond. Pitts’s book focuses on that northern bit, from the Bay Area up to Humboldt County, where a different kind of traffic is all-important: weed.

The book is set in mid-2016, six months before California voters legalised marijuana, and the impending vote has made the Humboldt County growers more paranoid than usual. They’re accustomed to warding off rustlers and junkies and deer and water-thieves, but unsure how to arm themselves for a massive market shift. The description of the steep hillside partly covered in redwoods and brambles and the long, rutted dirt track up to where the nervous growers live is so vivid you could almost choke on the dust of their ATVs.

Vic Thomas runs one of these hillside growing operations, out of the sight of most people, which is exactly how he likes it. Twenty years before, he and a woman he’d never met before, Barbara Bertram, witnessed a horrible crime and, in self-defense, meted out a little on-the-spot justice. The experience bonded them forever. The police totally misunderstood what went on in that charnel-house and have been trying to track down Barbara and Vic ever since.

The story opens with a middle-of-the-night call from Barbara. She tells Vic her son Jerry is in trouble again, and she wants to send him to Vic so he can lie low a while among the marijuana growers. Vic can’t say no. Alas, Jerry is a serial screw-up with less sense than Vic’s dogs.

Vic is not pleased when he discovers that Jerry and his girlfriend Piper stole a considerable amount of cash from a Russian who runs a Bay Area weed club. Vlad the Inhaler – yes, really – and his mobsters are determined to get their money back and make an example of Jerry.

When Piper finds her way up the hill to Jerry’s hideout, Vic recognises that his unwelcome guest can’t keep his mouth shut. He’s even more alarmed when he realises Piper’s stepfather is the head of the Dead BBs, a vicious outlaw motorcycle gang. Vlad has a financial relationship with the BBs, which makes them equally determined to find the Jerry and Piper and reclaim the money. The stepfather considers Jerry completely expendable and Piper only slightly less so. Pitts shifts the narrative point of view frequently, so you know not only what Vic is thinking, but also what Vlad and the Dead BBs are up to. You’re never in doubt about the danger heading up the 101 toward Vic, Jerry, Piper and anyone else who gets in the way.

One of the first moves the Dead BBs make is to kidnap Barbara, thinking she can tell them where Jerry is. It’s fun to see Pitts’s portrayal of a middle-aged woman who’s not just a victim. When Vic finds out she’s been snatched, his priorities are reordered, and he’s determined to rescue her. Cell phone reception is poor on the hill, but cell phones are nevertheless the undoing of a number of the novel’s characters.

Meanwhile, San Francisco Police Detective Roland Mackie is investigating the suffocation death of a young Latino man. He looks into the man’s past arrest record, which reveals his accomplice in several crimes was Jerry Bertram. He knows Jerry is Barbara’s son, and he sees a possible chain of associations, from Jerry, to Barbara, to Vic that might let him arrest Vic at last – an itch he’s wanted to scratch for two decades.

With three sets of determined antagonists – the Russians, the Dead BBs and the cops – looking for some combination of Jerry, Piper, and Vic, the opportunities for mayhem expand exponentially, and Pitts has deftly orchestrated the chase. There’s no time here for literary flourishes, maybe just a dash to the fridge for a beer, right in step with the denizens of 101.

If you like a crime story with nonstop action like this, you might enjoy Some Die Nameless by Wallace Stroby. Another excellent California read featuring bikers, weed and violence is Kem Nunn’s Tapping the Source.