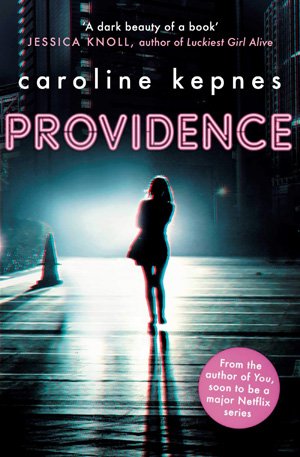 Written by Caroline Kepnes — Master of horror Stephen King has been testing the waters in crime fiction land in recent years, and the release of The Outsider earlier this year saw him edge further into our favourite genre with his third detective novel. Recently, a select band of crime authors have been sprinkling a little of the supernatural into their mix too – Sarah Pinborough’s Behind Her Eyes and SJI Holliday’s The Lingering spring to mind.

Now there’s Caroline Kepnes, a fairly new kid on the block, whose debut You caused quite a stir when it was released in 2015 and is about to become a TV series. In Providence, crime and horror share equal billing, so be prepared to suspend belief from early on.

In 2008, geeky schoolboy Jon Bronson disappears without a trace while walking the long way to school to avoid the bullies who make his life hell. After months of no news it’s generally accepted that Jon is dead.

Four years later he reappears, much to the delight of his childhood friend Chloe. He’s transformed from a skinny kid into a buff young man but although outward appearances say he’s healthy, Jon has no memory of what happened to him and he’s also developed some worrying traits… Get too close to Jon and you could have a nosebleed, or even black out.

Jon was left two things by his captor Roger Blair, a man he once knew as a slightly creepy school supply teacher – an annotated copy of The Dunwich Horror by HP Lovecraft and a letter in which Blair cryptically says: “You have power, power that will present itself to you slowly so as not to overwhelm you” and signs off with “We did good work down there, Jon”. Jon can see nothing good about the man he has become and much to Chloe’s dismay he leads a solitary life as he searches for clues in the text of the Lovecraft book, which has at its heart a half-human monster called Wilbur.

As time passes, Jon and Chloe lead parallel lives. She has followed her dream, while his life has become a nightmare. Chloe is pursuing her art; Jon is working as a glorified paper delivery boy. In the town of Providence, Rhode Island  – a place closely associated with HP Lovecraft – he is struggling to come to terms with what he has become. Meanwhile, in New York City, Chloe is struggling to come to terms with the realisation that she loves and misses her best friend.

Into a book that at times reminded me strongly of Dean Koontz’s Odd Thomas, Kepnes throws in a touch of the Anne Tylers in the shape of police detective ‘Eggs’ DeBenedictus. He is a man obsessed with a case that nobody else can countenance. Young people have been dying of heart attacks which are being dismissed as natural causes. Eggs isn’t so sure, but with everyone else treating him as a bit of a flake how is he ever going to get to the bottom of it all? He is soon on Jon’s trail. Nothing good can come of this…

The introduction of Eggs creates a neat disruption into the pendulum-like to-ing and fro-ing between Jon and Chloe. Is this a crime novel, a horror story, a fantasy or a romance? I never really came to a conclusion on that one. Probably best to say it’s a meld of all of them but it’s a book that certainly has an air of the supernatural about it. The characters are a little off the wall, but hugely likeable and Eggs in particular fair leaps from the pages.

Providence is a bit like a daisy chain. At times I loved it, at other times I loved it not. It’s certainly original and is a book that digs in and won’t let go. If you fancy trying something that wee bit different, then I’d advise that you add it to your reading list right away.

The Charlie Parker series by John Connolly is perhaps the ultimate when it comes to supernatural crossovers. For a more direct Lovecraftian influence, try Sherlock Holmes and the Miskatonic Monstrosities by James Lovegrove.