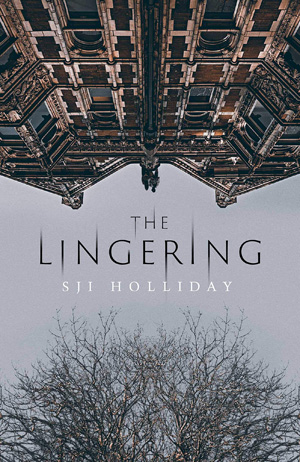 Written by SJI Holliday — Susi Holliday has been making quite a name for herself as a writer of creepy and claustrophobic thrillers. She is the author of the Banktoun trilogy and we reviewed book one, Black Wood, in 2015. One of her short stories, Home From Home, was shortlisted for the inaugural CWA Margery Allingham Award in 2014. So it’s best to approach The Lingering with caution, strong lighting and an open mind then. It’s chilling and downright spooky – perfect for the long winter nights that are just around the corner.

Jack and Ali Gardiner leave London in something of a hurry and opt for an altogether different way of life at Rosalind House, a commune in the midst of the Cambridgeshire Fens. It’s a down-at-heel, semi-derelict building which was formerly run as a mental institution and has a chequered past, but the modern-day residents are working together, aiming for self sufficiency and an inner peace, under the watchful, paternal gaze of their leader, the enigmatic and wonderfully-named Smeaton Dunsmore.

Ali and Jack are welcomed by him with open arms, which could be a result of the large donation they have made to secure their acceptance. Other members of the commune are not so sure about the newcomers. Angela, in particular, senses there is something off about the Gardiners and as this book progresses we begin to realise just how right she is.

In their former life, Jack was a detective with the Metropolitan Police, while Ali worked as a psychiatric nurse. They maintain they left London after Jack’s work in the child protection unit led to a nervous breakdown, but as Angela furtively searches their room, she discovered a bundle of newspaper clippings that tell quite another story. Angela’s main interest may be in the ghosts and spirits she believes haunt Rosalind House, but her research pales into insignificance as she tries to get to the bottom of the puzzling pair. Some things, however, are best left alone…

The wide open, lonely and desolate Fens are an ideal setting for this book. They’re a jarring contrast to the insular, claustrophobic and downright creepy Rosalind House, a place that is jam-packed with secrets to its rotting rafters. The members of the commune are a motley bunch, although they’re merely bit part players who fade into the background as Ali, Smeaton, Angela and Jack take centre stage. All four have secrets; some are more shocking than others and part of the fun is garnering nuggets of information that offer a clearer picture of who is not to be trusted, and why.

The modern-day tale is interspersed with excerpts from the journal of a doctor sent to Rosalind House in the 1950s to investigate complaints about the treatment of patients. Henry Baldock’s words make for uncomfortable reading and add to the sense of unease that permeates the pages of this book.

Holliday cleverly intertwines a cunning crime narrative with elements that wouldn’t be out of place in a horror story. Ali, it appears, is particularly susceptible to the spirits that lurk in the fabric of the run down old mansion and she experiences a number of spooky goings on that, try as she might, she can’t just explain away rationally. Nevertheless, she keeps her misgivings to herself, and we’re left guessing as to what’s real and what’s fake.

That mixture of sharply-focused realism and spooky supernatural won’t sit well with all crime fiction fans, and for me it took the edge off a well-plotted psychological thriller. But if you’re prepared to open your mind to all possibilities, then The Lingering will provide hours of unsettling entertainment,

For more spooky crime, try The Visitors by Simon Sylvester or Sarah Pinborough’s Behind Her Eyes.