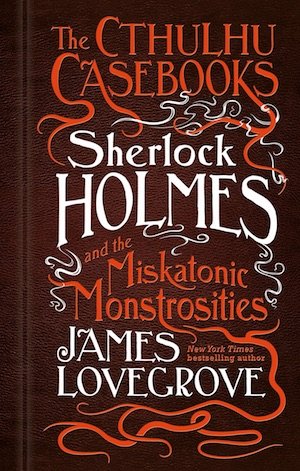 Written by James Lovegrove — Last year’s Sherlock Holmes and the Shadwell Shadows was a hugely enjoyable crossover that pitted HP Lovecraft’s eldritch horrors against Arthur Conan Doyle’s master detective. The contest ended in a draw with Holmes and Watson’s worldview irrevocably altered to assimilate the understanding of humanity’s insignificance in the cosmos. At the same time, they were able to thwart Moriarty’s plan to bring the world to its knees and begin a new dark age of rule by the Elder Gods. The only winner were the readers, who got to enjoy a superlative pulp thriller.

It is now 1895, 15 years after the Shadwell Shadows story. Holmes and Watson, tired but unbroken by their battles with otherworldly foes, have managed to keep the world safe from supernatural incursion. However, they will face their greatest test yet after Inspector Gregson (an initiate in the so-called Dagon Club, alongside Holmes, Watson and Mycroft) tells them of an American patient in the infamous dreaded Bedlam asylum who may interest them. His identity is unknown, and his behaviour is troubling. Bizarre scribbles cover the floor and walls of his cell, and his only communication is in an alien tongue.

The prisoner is in a wretched state. One hand is missing and one side of his face is badly scarred. His strange language is familiar to Holmes and indicates contact of some kind with malign cosmic forces. His rambling suggests control by a ‘hidden mind’ but little else of value. Holmes, in his famous fashion, is able to deduce that the patient is from the Boston area, has come from wealth, and was academically trained. Holmes appeals to his friends and contacts to try and identify the man and draws a blank, but is pointed towards a Nathaniel Whateley of Miskatonic University, Massachusetts who is in London. It’s a big city but there seems at least a reasonable chance that these two individuals, with similar backgrounds and from the same region of America, might known one another.

Conan Doyle famously rejected hints of the supernatural in his Holmes mysteries in The Adventure of the Sussex Vampire, while HP Lovecraft’s Cthulhu Mythos is nothing but supernatural. In his endeavour to blend what seem to be two incompatible literary canons, James Lovegrove made the bold decision to really go for it. We can be glad he did so, and  Sherlock Holmes and the Miskatonic Monstrosities is much stronger for it. Lovegrove narrates via Watson in Conan Doyle fashion but suggests that the original Holmes canon is a fabrication, engineered to keep the populace ignorant. Knowledge of the cosmic foe the world faces would lead to insanity for all of us. Nonetheless it is respectful of Conan Doyle’s work and the references to the private detective’s previous cases, as well as tips of the hat to Lovecraft’s stories, show an author who is obviously very familiar with the material.

The structure of the Miskatonic Monstrosities mimics Conan Doyle’s second novel, The Sign of the Four. The first half of the book describes Holmes’ investigation in the present, while much of the second half provides an account of how the situation developed, before finishing in the present with the solving of the mystery. Yet the narrative in the second part of the book is as strong as in the first, something which Conan Doyle was not able to manage in his novel. This is a gripping story of jealousy and betrayal between academics with themes taken from Lovecraft’s At the Mountains of Madness and Herbert West – Reanimator.

The Miskatonic Monstrosities is the second of three planned Cthulhu Casebooks but works just as well on its own and the book doesn’t exist merely to set up the finale. Readers who jealously guard Conan Doyle’s most famous creation may object to some of the literary license taken by Lovegrove, but for the rest of us the Miskatonic Monstrosities is a first rate entertainment.