From self-published to attracting the interest of two publishers, former journalist John Marrs has enjoyed an interesting journey as an author of standalone psychological thrillers – including The One, which is now being adapted for the small screen by Netflix. His latest book, Her Last Move, takes the British author into the realms of police procedural but he manages to give the sub-genre a fresh twist with the inclusion of a super recogniser. Not sure what that is? Read on…

Can you tell us a little about Her Last Move?
It follows two London-based detectives, Becca and Joe, on the hunt for a killer who is murdering men and women in a particular field of employment and in increasingly macabre ways. Meanwhile, Becca is struggling to juggle being a single parent to a child with special needs and her career, and Joe is battling a crippling condition that threatens to railroad his career.

What inspired you to write this story?
I wanted to write a police thriller just to see if I could manage it. All my books to date have been psychological thrillers and Her Last Move is an extension of that but with a procedural twist. I don’t see the point in me writing the same kind of book over and over again even if they are successful. So I set myself a challenge to push myself and this genre certainly pushed me! 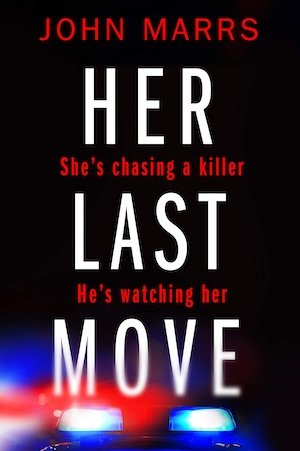 What made you include a super recogniser in your book?
I first read about them in The Guardian newspaper. They are a small department in London’s Metropolitan Police made up of detectives from across the force who never forget a face. Most of us will remember up to 20 per cent of faces that we see in our lifetime. However, an SR has the capacity to recall 80 per cent. Just 2 per cent of the population share their ability. The unit of ten or so officers has already yielded incredible results. Take the London Riots of 2011. I assumed the images captured on CCTV combined with facial recognition software would have a high success rate in the same way it often saves fictional detective teams tracking down suspects. From 5,000 images captured by CCTV during the turbulence, SRs identified 609 suspects. One officer alone identified 190. However, facial recognition software identified just one. They are such a little-known part of the police that they were ripe for exploration in a thriller.

Tell me a little about your background and how you came to crime fiction writing in the first place?
I’m a journalist by trade. I spent 25 years interviewing celebrities from TV, movies and music for a living but always thought it might be interesting to try my hand at writing a book. However, my 2013 debut, When You Disappeared, was rejected by 80 different agents and publishers!

Can you describe your journey from self-publishing to Thomas & Mercer?
I am fortunate to have two contracts with two publishers – one for psychological thrillers with Thomas & Mercer and one for speculative fiction with Ebury. After all that rejection for When You Disappeared, I self-published it instead. Then two years later, I was approached by Thomas & Mercer who wanted to take it on. With some re-writes, it was re-released and has since sold more than 300,000 copies in 18 months. At the same time, my third self-published book, The One, was taken on by Ebury. It went on to become one of Simon Mayo’s Radio 2 Book Club picks and has since been sold to 17 different countries. It’s also been commissioned as a ten-part series by Netflix, to start filming in mid-2019.

How do you feel about The One being adapted for the screen?
Naturally, very excited! I haven’t quite got my head around it yet. I first heard it was likely around four months ago but I’ve had to keep quiet about it until it was officially announced in November. That was hard!

Are you involved in creating the series?
No. I have nothing to do with it. It’s being adapted by the man behind Misfits and that suits me just fine. The production company, Urban Myth Films, are the experts in this field, not me. I’m not precious about things like that. My book was my project, now it’s time for someone else to come along and take it in a fresh, new direction for television.

Do you meticulously plot the story before you begin work or is it something that develops as you write? Are you sometimes surprised at where the narrative leads you?
I’m not much of a plotter. I’ll know the basic story and then start writing. But later when it comes to rewrites, the character I began with is often very different to the one I have ended up with because of the changing narrative.

How do you write?
My first five books were written on trains. I live in Northamptonshire but until 11 months ago, I worked in London so I commuted each day. With round trips and lunch breaks, I had a good four hours a day to write. I’d slip on my headphones, find a moody playlist of music and ignore the world to create my own. Her Last Move was the first one I’ve written completely at home.

Do you need a set time and place to work comfortably?
No, I can write anywhere. I have an office at home. I’ll go to the gym for around 9am, then afterwards, start writing in the restaurant for a few hours before continuing at home. I try to get at least 2,000 words written a day, which is very doable. Even if they are codswallop, it doesn’t matter. It’s something to work on. I do write better late afternoons than first thing in the morning though. So mornings are for rewrites, afternoons are for fresh copy.

Do you enjoy reading crime fiction?
I don’t limit myself to any genre. I read all sorts depending on my mood. My recent reads have included The Seven Deaths of Evelyn Hardcastle by Stuart Turton; A Ladder To The Sky by John Boyne; Force of Nature by Jane Harper and My Thoughts Exactly by Lily Allen. I’m currently listening to Anatomy of a Scandal by Sarah Vaughan on audiobook

What made you take the leap from journalism to writing?
I worked for as long as I could manage doing both but when the books started taking off, it became impossible to continue. I was working 15-hour days to hit all sorts of deadlines. So I decided something had to give, and changing careers was far too exciting a prospect to turn down.

So far you have concentrated on standalone books. Can you see yourself writing a series in the future?
There may possibly be a sequel in the future, I don’t know. I get bored easily and I like to write about different characters too much. Focusing on the same ones in a series doesn’t appeal yet. But we shall see.

What’s next for you?
My next book is called The Passengers and is released in April 2019. Set in the near future, eight people set off for work one morning in their driverless cars, only to be told through their speakers that their cars have been hacked and are under the control of someone else. They are programmed to collide head-on that morning. It is up to a jury and social media to decide who lives and who dies. Think Speed meets Hunger Games meets Big Brother!

Read our review of Her Last move here.

By crimefictionlover
From the hallowed pubs and courthouses of Edinburgh, to the old age homes of Australia, below galleon decks, in attics and live (or dead) on stage at the Theatre Royale – crime lurks EVERYWHERE! What a fascinating lineup of new crime novels we have for…
Features

By DeathBecomesHer
Tyneside-based author Matt Wesolowski has garnered a loyal crime fiction following by thinking outside of the box, and in our third featured interview from Dr Jacky Collins’ entertaining The Doctor will see you now series, he explains how serendipity has played a part in his…