The Seven Deaths of Evelyn Hardcastle 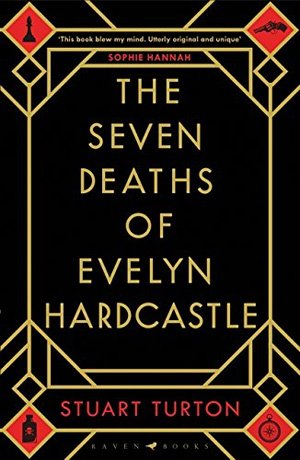 Written by Stuart Turton — Almost every review of this debut crime novel starts off with the disclaimer which says that The Seven Deaths of Evelyn Hardcastle is, well, difficult to describe. But, if I were to tell you that it is Cluedo meets The Matrix meets Agatha Christie meets the reinvention of Sherlock Holmes as a TV series, would you start to get a feel for its unique atmosphere? It is a mad mash-up of influences, nicely unified by a consistent storytelling style throughout. It is also one of the few novels where it might be useful to read the blurb on the back before embarking upon it, otherwise you may end up as bewildered and lost as the main protagonist in its opening pages.

The first person narrator finds himself shouting out the name ‘Anna’, which means little to him. He cannot remember any Anna, nor why he should be calling her name. He finds himself in a forest at night, hears cries for help and believes he has witnessed a crime. The use of the present tense can feel contrived in some books, but here it fits perfectly with this scenario of memory loss and trying to determine who he is. In desperation, he knocks at the front door of a manor house, where he is received with some surprise and kindness. It turns out he was a guest there, but his garbled story doesn’t impress anybody since he cannot even remember his own name.

So far it seems like a typical study of amnesia, but Stuart Turton moves things up a notch. The straightforward story of memory loss becomes diabolical: the narrator has been selected to solve the mystery of the death of beautiful Evelyn Hardcastle, the daughter of the house. He will be doomed to relive the day over and over, each time in the body of a different person, viewing things from a somewhat different perspective, until he can name her murderer. That is the only way he can free himself from this strange enchantment. Yet it soon emerges that he is not the only character to reappear in different host bodies. In fact, there seems to be a vicious competition going on between several different amateur detectives and only one will ever escape the house.

The setting is as important as the story itself. Blackheath House is an isolated country manor surrounded by woods of the type that frequently appears in Golden Age detective fiction. It is bursting at the seams with eclectic guests assembled to celebrate the birthday of Evelyn Hardcastle, freshly over from the Continent. Look a little more closely, and you will find Blackheath is not just a grandiose, but also a crumbling country pile, decidedly shabby around the edges, although no expense seems to be spared entertaining the guests and there are still servants in the basement and attics.

This novel has such an ambitious and complex structure that you may well find you need to make notes as you go along to keep track of who does what and where. This is where the Cluedo similarity is most apparent: small details become significant, characters appear to change depending on who is looking at them and the narrator has to go through a process of elimination, confused even further by conflicting time frames. Can he stop the murder? And if he stops it, will he still be able to free himself from this Groundhog Day-like nightmare?

This is a fabulously dark and witty concept, executed with quite some panache by debut author Stuart Turton. The way in which the narrator gradually learns how to make use of each of his hosts’ unique abilities – charm, worldly connections, intelligence, discipline, and so on – is amusing enough, but it is the way in which he is forced to come to terms and even fight with the darker side of the characters he inhabits which makes the story quite memorable. One of his hosts is a spoilt brat and rapist, for example, another is a drug dealer, another a decrepit and obese old man.

It is a long book and by its very nature somewhat repetitive, so you may find the middle part sags. However, it is worth persevering for the sake of the dramatic and unexpected ending. It’s a mind-bending tour de force, so leave aside any niggles until you have finished reading it!

As an additional note on this strange book, it will appear under the title The Seven and a Half Deaths of Evelyn Hardcastle in the US this September. Fear not, it’s exactly the same book and as the author has promised you still get the same number of murders for your money.

For another strange, conceptual crime novel try Broken Monsters by Lauren Beukes or The Word is Murder by Anthony Horowitz.