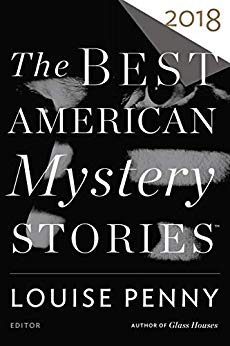 Edited by Louise Penny — What an entertaining collection this is! The stories cover a wide range of mystery, crime and suspense writing, with a fair bit of edge. Edited by popular Canadian author Louise Penny from a collection assembled under the direction of Otto Penzler, the 20 stories first appeared in short story magazines and anthologies during 2017.

“A great short story is like a great poem. Crystalline in clarity. Each word with purpose. Lean, muscular, graceful. Nothing wasted. A brilliant marriage of intellect, rational thought, and creativity,” says the editor, and this book underscores her point on every page.

Though most of the stories run to about 20 pages in Too Much Time, Lee Child doubles that length. He meticulously describes how the redoubtable Jack Reacher digs himself in deeper and deeper with Maine police while all the time working on an unexpected solution to his precarious situation. Joyce Carol Oates also provides a near-novella with Phantomwise: 1972, about a naïve college coed who makes consistently bad choices and the men who exploit them.

Most of the stories take place in the good old US of A, from the sketchy surrounds of Paul Marks’s Venice Beach in Windward to James Lee Burke’s Cajun country in The Wild Side of Life, though a few are set in more exotic climes: Africa in David H Hendrickson’s Derringer-winning Death in the Serengeti, the tropical and fictional island of St Pierre in Breadfruit by Brian Silverman, and the Republic of Korea in PX Christmas by Martin Limón.

The selected authors find clever and creative ways to deploy the staple characters of crime fiction – unfaithful wives in Waiting on Joe by Scott Loring Sanders, assassination in Takeout by Rob Hart, and serial killers in Andrew Klavan’s All Our Yesterdays. They deal with classic crime situations too: escaping a difficult past in Michael Bracken’s Smoked and John M Floyd’s Gun Work or evading the long tail of a super-secret job in Charlaine Harris’s Small Signs. You’ll find a prison breaks in Cabin Fever by David Edgerley Gates, and the double or is it triple? cross in Y is for Yangchuan Lizard by Andrew Bourelle and Rule Number One by Alan Orloff.

A couple of the scams are so deftly described that you may find yourself grinning with the vigilante surprise of Michael Connelly’s The Third Panel and the flim-flamming of an elderly man in TC Boyle’s The Designee, which leaves it to you to decide how complicit the elderly ostensible victim is. It’s the best story of his I’ve ever read. There’s also a thought-provoking twist in Banana Triangle Six by Louis Bayard.

This talented collection of authors fills their stories with great lines, though one of my favourites comes from The Apex Predator, by William Dylan Powell, wherein the main character claims he learned in Uncle Sam’s navy the “most useful tactical skill ever developed by humankind – and it’s not swimming or fighting or tying knots. It’s the art of bullshitting someone so you don’t get in trouble.”

If you’ve been scanning this piece looking for familiar names, you may also have noticed the near-absence of women authors. Joyce Carol Oates who has more than 100 published books is not a surprise in this list, nor is Charlaine Harris, who’s been publishing mystery fiction since 1981. It’s a real mystery why no other accomplished, newer female voices appear here. Women are somewhat more prominent in the list of Other Distinguished Mystery Stories of 2017 at the back of the volume, where nearly a third are women – 10 of 31.

And which publications brought these stories to light in the first place and where you might expect to be reading next year’s winner’s now? Ellery Queen Mystery Magazine published four of the stories, two were from Mystery Tribune, and Alfred Hitchcock Mystery Magazine, Fiction River, and Switchblade, one apiece. Also two of Level Best Books’ anthologies–Noir at the Salad Bar and Snowbound–each produced one of these best stories.

Also try the Mystery Tour anthology from CWA, edited by Martin Edwards or Alive in Shape and Color edited by Lawrence Block.

By DeathBecomesHer
Fans of Canadian crime fiction author Louise Penny are already familiar with Inspector Armand Gamache of the Sûreté du Québec. Now viewers can catch up with him and his team in an eight-episode series on Amazon Prime. Gamache has been described as the French Canadian…
Features