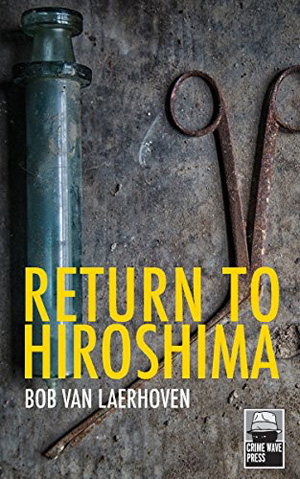 Written by Bob Van Laerhoven, translated by Brian Doyle — Belgian TV crime series have made a huge leap forward in recent years, with Salamander and Tabula Rasa being the most recent ones to hit the UK screens. Belgian crime fiction, however, has been more opaque to English-speaking audiences and is only just starting to get translated. In fact, we have only featured one Flemish author previously on Crime Fiction Lover: Pieter Aspe with his series set in Bruges. More recently we gave five stars to francophone Belgian writer Paul Colize’s crime novel Back Up. That book moved rapidly between Berlin, London and Brussels and this penchant for foreign locations seems to be equally pronounced with Bob Van Laerhoven, an experienced journalist and writer with more than 30 books under his belt.

As the title indicates, Return to Hiroshima is set in Japan. This naturally conjures up images of the world’s first atomic bomb being dropped on the city, and there is indeed a narrative strand in the book which has to do with the long-term consequences of nuclear fallout. However, most of the action takes place in 1995, which keen Japan-watchers remember as the year when an obscure Japanese religious group unleashed a sarin gas attack on the Tokyo metro. The members of the Aum Shinrikyo cult convicted for the attack were executed earlier this month, which makes this book extremely topical.

Against a backdrop of a faltering Japanese economy after a long period of boom, several strange, haunted characters come together in Hiroshima. Mitsuko is the deeply traumatised daughter of a Yakuza lord who has set up his half-criminal, half-cult-like empire on the abandoned island of Hashima in the bay of Nagasaki. She manages to escape from her father’s tyrannical grip, but the only place where she can go in Japan, the only place where her gigantic stature and strange appearance will not provoke too much attention, is Hiroshima, where she can claim to be a descendant of someone deformed by radiation.

Inspector Takeda is investigating the multilated body of a newborn baby found almost as an offering on the Peace Monument in Hiroshima. Takeda is the product of a guard raping his Dutch mother in a Japanese POW camp and struggles to fit into Japanese society.

Meanwhile, Xavier Douterloigne is the son of a Belgian diplomat who spent most of his childhood in Japan. He returns to the city in an attempt to understand the death of his sister. There he stumbles across Yori and Reizo, two youngsters living in a so-called Suicide Club squat. Needless to say, German photographer Beate Becht and Mitsuko also end up coming across this squat. While each character is preoccupied with their own problems, the situation is getting ever more volatile, even explosive, and there are links with religious extremists, nationalists and terrorists.

It is nearly impossible to give a short summary of the complicated plot, which weaves in Aum Shinrikyo, the Japanese mafia and World War II and Return to Hiroshima hovers between being a conspiracy thriller, historical fiction, police procedural and noir. What is certain is that it is a page-turner, with short chapters from multiple viewpoints, which lend themselves far too well to just-one-more-chapter-before-I go-to-sleep syndrome. There are plenty of good insights into the Japanese psyche, the almost schizophrenic nature of their society, although it is mostly the dark side that you will come across in this novel. If there is one weakness, it is the sheer number of characters, which makes it difficult to follow at times. Not all of them are well developed, nor, indeed, necessary to the story.

Overall, it is a satisfying, but very dark and eerie story, which will appeal to readers who like their genres well shaken and stirred.

Another European author working with Japan and Japanese characters is Nicolas Obregon – check out his books.