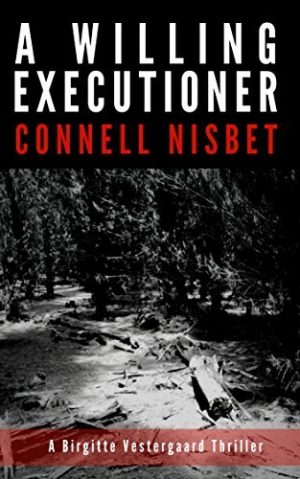 Written by Connell Nisbet — A Nordic-inspired police procedural set in remote Australia; a debut written by an established magazine writer; an ambitious and unsettling work containing a couple of the most uniquely gruesome murders you’ll encounter in fiction this year. A Willing Executioner is a novel full of surprises, both genre defying and a great example of its genre.

A Willing Executioner opens with a small boy kicking a football around in a remote aboriginal settlement near Alice Springs, in Australia’s Northern Territory. The town, an old asbestos mining settlement, is slowly dying, with its inhabitants forced to move to other places less remote, where it’s cheaper for the government to provide them with essential services. Mirroring the slow death of this small town is the much quicker and more gruesome death of an old Danish man the local boy finds in the mud of a dried-up creek. The man is Hans Thostrup, a big player in the European energy sector, on a holiday hoping to forget about the death of his wife.

Detective Birgitte Vestergaard is the one sent to find Thorstrup after he disappears without a word. Vestergaard is an ex-homicide detective, forced to move to investigating fraud after a homicide case she was leading went bad. Cleared of all wrongdoing, Vestergaard is nevertheless treading carefully because there are people in high positions in the Danish National Police Headquarters who want her gone. She heads to Australia, hoping for a quick and neat solution to the case.

What she finds is Detective Anthony Kingsmill, who quit the New South Wales Police to join the Australian Federal Police, only to find that the position he was meant to move into had disappeared. Kingsmill is experienced but world-weary, and he too must tread carefully due to his uncertain position. Vestergaard also finds that the local police are sexist and inept officers whose bungling and petty self-interest are holding back the investigation. These local police are the weak point of A Willing Executioner, a book in which most of the background characters seem to be hastily written caricatures, and are often indistinguishable from each other. However, these characters drive the plot, frustrating  Vestergaard’s investigation and highlighting the tension between the Aussie and the Danish detective. This tension is proof that Nisbet can write compelling characters, along with an intriguing plot.

When Vestergaard and Kingsmill’s investigation turns up the mutilated body of Thostrup near Alice Springs, the Dane is certain that she’ll be able to head home. But the local cops refuse to acknowledge some clear inconsistencies in the case, most obviously that the old man had his leg eaten off by a large shark, and yet was found posed in the desert thousands of kilometres away from the nearest ocean. When another body turns up in Victoria, this time with bite marks that appear to be the work of a crocodile, the inaction of the various Australian police forces becomes too much for Vestergaard. Taking the investigation upon herself, she dives deep into the shady world of land deals and mining rights.

The plotting is police procedural at its best. Although you know a lot about the killer before the detectives do, the process of investigation and sleuthing is compelling. There are some details that are difficult to believe at best, for instance the reluctance of the Australian police to draw a connection between the two murders, one by shark and one by crocodile, where the body was dumped over a state line. The fact that the willing executioner chose such a brutal method is also hard to fathom. Why would he draw attention to himself in such a way?

For a self-published debut, A Willing Executioner is an impressive police procedural. There are some errors would have been ironed out with better editing but there’s certainly enough character depth to allow space for a few more books about Detective Birgitte Vestergaard.

For some great crime fiction direct from Denmark try The Susan Effect. And, Norwegian author Jo Nesbo’s debut The Bat was also set in Australia.

By crimefictionlover
Matters of world health notwithstanding, there’s been a welcome infusion of new blood into our genre this year – as the breath of nominations in this category demonstrates. Now it’s up to you you to pick the winner of our debut award for the Best…