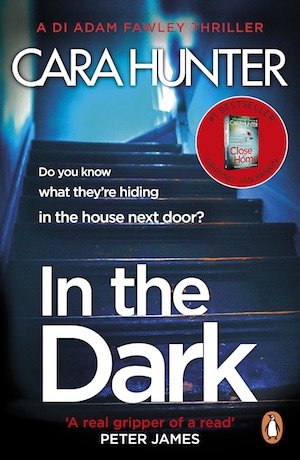 Written by Cara Hunter — Earlier this year we met Cara Hunter, and her creation DI Adam Fawley, in Close to Home. Now Fawley and his team are back with another confounding case set in Oxford.

The tale begins in dramatic style in a scene that’s Grand Designs mixed with Hammer horror. Mark Sexton, an objectionable, overbearing property owner, comes to check on progress at the house he’s bought in prestigious North Oxford. He and the builder tour the property, leaving the work that’s going on in the cellar until last – because, down there, the job has hit a problem. A party wall between the property and its neighbour has a huge crack in it. And as Sexton takes a closer look, he’s shocked to spot a pair of eyes peering back at him.

They belong to a young woman. She and a little boy have been imprisoned in the next door cellar, but who are they and how did they get there? The woman is too traumatised to tell her story and the child too young and withdrawn. As Fawley and his detectives begin their investigations, it becomes clear that the man most likely to have committed the heinous crime is an elderly ex academic who lives at the property. But William Harper is living with Alzheimer’s, well known locally for wandering around outside in his pyjamas. He also has a drink problem and a foul temper. It’s going to take all of Fawley’s skills to get to the bottom of this one, particularly when an unexpected discovery reopens an unsolved missing persons case too.

Cara Hunter may be a new crime author but she is already making a name for herself in the land of police procedurals. Her books are almost documentary in style, the action interspersed with news items, notes from police interviews and other meaty information, hitting the spot perfectly with its meld of clinical detail and depth of characters. Hunter’s version of Oxford is in sharp contrast to the dreaming spires of say, Morse, but all the more realistic for it.

The twin cases, and their many stops and starts, take up the majority of the narrative here, but this is book two in a series and we’re gradually getting to know Fawley’s team though In the Dark works perfectly well as a standalone story if you want to dive straight in. Taking centre stage this time are DC Gislingham, a new father doing his best to take a fair share of baby duties from his wife, who isn’t coping with the new arrival too well, and DS Quinn, single, always smartly dressed and forever with an eye for the ladies. It’s that final attribute that’s about to get him into hot water…

Like Keith Nixon’s Solomon Gray, Adam Fawley is a man trying to cope with the loss of a child. Fawley and his wife Alex are still recovering from the death by suicide of their young son and their relationship is fraught and fragile these days. Their shared concern for the welfare of the little boy, rescued from the cellar and so far rejected by his mother, is about to create a new raft of issues that threaten to tear them apart for good.

Close to Home is an enjoyable read and In the Dark once more hits the spot. The investigation is painstaking and realistic in its pace, but things never drag because of the way you are treated to glimpses of the main characters’ personal lives. Hunter is adept at misdirection and you’ll be hard pressed to guess at how this one will turn out.

Although the final few chapters feel a little rushed after all the fine build up, it might be advisable to set aside a few quiet minutes to sit back and work out that’s just transpired. More Adam Fawley please!

Take a look at five of the best police procedurals here. For more Oxford intrigue, try Hold My Hand by MJ Ford.