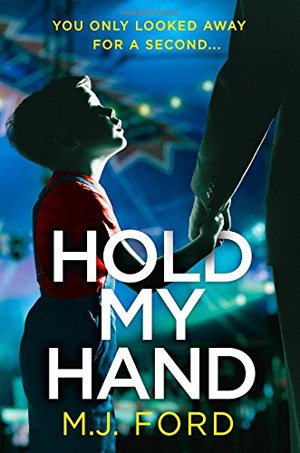 Written by MJ Ford — You have to hand it to book publicists. When a book arrives in a box, with a great big lollipop, and a secret trigger that begins to play March of the Clowns when you pull out the new release, then it’s guaranteed to pique the interest.

And the theme of the packaging begins to fall into place right from page one of Hold My Hand. It’s the summer of 1987 in a small Oxford village and eight-year-old Josie Masters is at a traveling fairground and circus with her older brother, Paul. She is keen to spend the 50p given to her by gran, while Paul is more interested in spending time with his latest squeeze Helen Smith, so Josie goes off to meet her pals and have some fun, with strict instructions to be back by three o’clock.

She spends her cash wisely, and even manages to use her football skills to win a giant teddy at one of the stalls, watched by a small boy in a Liverpool shirt who is obviously enamoured of her talents with a ball. The next time she sees the little ginger headed boy, he is walking away hand in hand with a man dressed as a clown. It’s the last time anyone sees Dylan Jones…

The story then moves ahead 30 years. Avon and Somerset police detective Jo Masters is called to the scene when the skeletal remains of a child are uncovered in the grounds of a house in Bradford on Avon. The body is wearing a tattered Liverpool shirt. It looks like Dylan Jones has finally reappeared after all these years.

Dylan’s disappearance has troubled Jo since that fateful day in 1987, but she has plenty of other things on her mind right now. Her long-term relationship with fellow copper Ben Coombs has broken down due to his gambling addiction, and Jo is living in a crummy, run down flat as she decides whether to use IVF to give her the child she so craves. In short, Jo is a mess. The reappearance of a spectre from her past does nothing to improve the situation.

Then a young boy goes missing, deliberately separated from his group of friends and then led away by a man in a clown mask. Copycat? Or has the ‘clown killer’ decided to make a comeback? Jo is seconded to Thames Valley force as the search for 11-year-old Niall McDonagh intensifies, but although they seem to have a suspect in their sights, she is convinced that he isn’t working alone. Trouble is, no one else seems to share that gut feeling and as personal life and work collide, Jo is put under increasing pressure. She let Dylan Jones go, is Niall McDonagh destined to be another case that preys on her mind?

Hold My Hand is MJ Ford’s first novel for adults and he has an engaging, easy to read style which sends the pages flying by. The characters are sharply rendered and I particularly loved the troubled, eminently human Jo Masters. The action is played out in a wide variety of places and although this is a part of the country I’m not familiar the author’s deftly drawn descriptions meant I was able to picture perfectly the settings involved.

I was engrossed for the majority of this book, only to lose something of the momentum in the latter few chapters. I do love a good twist, but things got a little far fetched for me and I was left with a feeling of bemused anticlimax. This is a commendable debut from a name to watch.

Missing children are a popular starting point for some fine crime fiction work. Try In Her Wake by Amanda Jennings or Louise Voss and Mark Edwards’ From The Cradle.