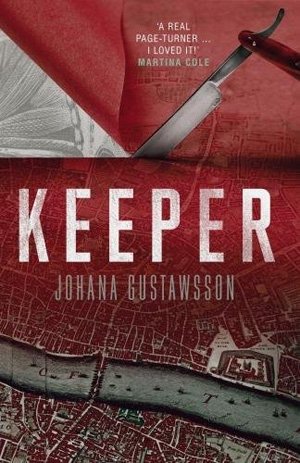 Written by Johana Gustawsson, translated by Maxim Jakubowski — If you’ve read Johana Gustawsson’s first novel Block 46, you’ll know that this is an author who doesn’t shy away from hard-hitting subjects and graphic descriptions of the cruelty humans inflict upon each other. Keeper, her second novel, confirms her place in the canon of women writers who prefer the infinitely dark to the lightly cosy.

This is the second in the Emily Roy and Alexis Castells series and the main protagonists as well as the settings reflect the very international outlook of the author herself. The author is a French journalist with a Swedish name (and husband) who lives in London. So it is not surprising that Johana Gustawsson has  Canadian criminal profiler Roy and French true-crime writer Castells working together once more for an investigation spanning England and Sweden. Alongside her familiarity with several different countries, Gustawsson is a natural when it comes to looking at how appalling events from the past can still torture the human psyche, and have bearing upon the present.

Although it is ostensibly a Roy and Castells series, there are plenty of other characters involved and the two women don’t really make an appearance or start working together until about 20 chapters in. Instead, we are introduced to a host of other intriguing female characters. It is Detective Karla Hansen in Halmstadt, Sweden, who finds the mutilated corpse of a young woman, with her breasts cut off as well as chunks of her thighs and hips. Then there’s Freda, a prostitute of Swedish origin trying to make a living in 1880s Whitechapel rocked by fear of Jack the Ripper. Alienor Lindbergh is a determined new addition to the Swedish police force, while Julianne Bell is a well-known TV presenter and actress who is kidnapped outside her house in Mayfair. The rapid introduction of so many different settings, timelines and characters feels a little disorienting to start off with, but soon links begin to emerge between their various stories.

When Julianne Bell is abducted and her shoes are left behind with socks neatly tucked into them, the police find many similarities to the terrible series of Tower Hamlets murders some 10 years earlier, which themselves had some of the hallmarks of the Ripper killings in 1888. When the body found in Sweden also bears wounds identical to the Tower Hamlets victims, it becomes clear that the killer is still active. With the supposed perpetrator of 10 years ago behind bars in Broadmoor, is this a copycat killer, someone fascinated by Jack the Ripper, or are the provocative wounds designed to hide a deliberate reason for the murders, rather than a mere random selection of victims?

You don’t have to be a squeamish reader to shrink away from the relentless amount of gory detail and descriptions of seriously troubled mental states. Victorian London is also described in its full flea-ridden and disease-addled misery, although I was not entirely sure what the Jack the Ripper elements added to the overall story. However, the Victorian setting is not as gratuitous as to be poverty tourism, and it does make for a poignant counterpoint to the affluent lifestyles enjoyed by Bell or Castells in the present-day. It gives context to the social environment that leads to suffering and warped minds without sensationalising it, although there seem to be just a few too many coincidences at the end. Ultimately, it is a very sad tale about being unable to escape the grip that certain events or people have over us, much like the first book.

Johana Gustawsson is one of our women writers to watch in 2018 and she certainly doesn’t disappoint for readers who like their crime fiction dark as night. Other writers with similarly gritty stories are Fiona Cummins, Alex Marwood or Mo Hayder.