I’ll Be Gone in the Dark 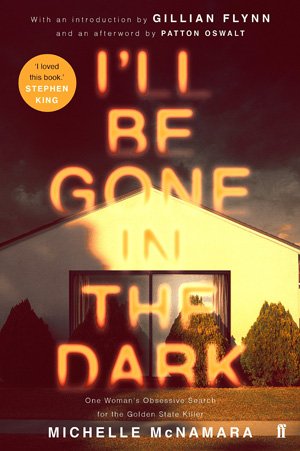 Written by Michelle McNamara — Michelle McNamara was well-known to true crime fans as a journalist, screenwriter and creator of the popular website TrueCrimeDiary.com, which investigated unsolved crime cases. At the time of her sudden death in 2016, she had done a considerable amount of research into a decades-old case. The man she dubbed the Golden State Killer was responsible for at least 50 violent sexual assaults and 10 murders in California in the 1970s and 80s, yet there has been relatively little written about him in the mainstream press.

He was originally known to the police as the East Area Rapist in 1976-77 in and around Sacramento, California. He was averaging two victims a month at his peak, and seemed to outmanoeuvre the police and melt into the dark. But it was only 20 years later, after DNA profiling made it possible to link cases across the whole state, that it became obvious that several homicides in Orange County and Santa Barbara in the early 1980s were also connected to the rapist. McNamara has patiently uncovered the links between the Golden State Killer and several other rapes and murders, spoken to members of the investigative team in each case and examined the evidence herself. She was utterly dogged in her pursuit of this serial killer’s identity and felt she was so close to a solution, but she sadly died before completing this book.

So readers of true crime who are hoping for a big reveal and the final answer will be disappointed: the book does not have a neat and satisfying conclusion. It is, however, a labour of love in reconstructing her notes and organising her materials. The book was half-finished at the time of her death. Her lead researcher, Paul Haynes, and a friend of hers, investigative journalist Billy Jensen, accessed the thousands of files she had painstakingly gathered over the years and completed the finished chapters with published articles and unpublished notes.

We don’t review much true crime at Crime Fiction Lover – our passion is for fiction – but this book is exceptional in the way it captures a specific time and place, as well as some unforgettable, if brief, character portraits of victims and police investigators. McNamara obtained her MFA in fiction writing, and, although her accounts of the victims’ lives and stories are factual, they have all the vivid descriptive power and fluency that fiction can bring to the reader. Not only does it give voice to the victims and their families, it also does a brilliant job recreating that atmosphere of panic that gripped the state during that time.

In many ways, it is also a memoir of McNamara and her fellow investigators, people who become obsessed with unsolved cases and with bringing criminals to justice. The author is brutally honest about the ways in which this case is traumatising her: “The case dragged me under quickly. Curiosity turned to clawing hunger… There’s a scream permanently lodged in my throat now.”

The reason some of us are reluctant to read true crime is that occasionally it can feel like voyeurism, that it focuses too much on the perpetrator, almost glorifying their criminal activities, thus ensuring that they will never be forgotten. Compared to the colder, more detached style of investigative non-fiction bordering on fiction of Truman Capote or Norman Mailer (In Cold Blood and The Executioner’s Song, respectively) this book is full of compassion for the victims: newlyweds, mother and daughter arguing over swimsuits, a younger brother feeling guilty for coveting his murdered brother’s lifestyle. It is also personal, as Michelle McNamara makes clear in one of the opening chapters. She grew up in a family-friendly Chicago suburb, full of working class Irish Catholic families, but when she was 14, a young woman was killed there while out jogging. The case had a profound impact upon her psyche and life, as it did on many of her peers. This book is also a cathartic attempt to bring some kind of closure to the unsolved case of Kathleen Lombardo, the first victim Michelle ever encountered, who set her on the path of researching true crimes.

The jumping around between timelines and fragmented ending may irritate some readers, and perhaps the author would have tidied that up if she’d completed the book herself. Nevertheless, it is a moving, enthralling story, recommended to fans of both true and fictional crime, and destined to become a classic in its field.

For another exceptional account of a true crime, see The Adversary by Emmanuel Carrere or Sutton by JR Moehringer.