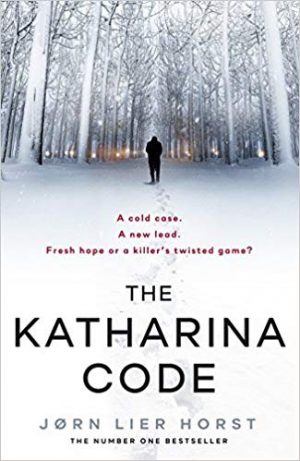 Written by Jørn Lier Horst, translated by Anne Bruce — If you’re into Scandinavian crime fiction but not familiar with the William Wisting series by Norwegian writer Jorn Lier Horst, consider yourself lucky, because that means Horst, a winner of the Glass Key and Petrona awards, will be the best Scandinavian writer you haven’t yet discovered. As Nordic cops go, Wisting sets himself apart. He’s not the stereotypical angsty, unhealthy maverick with family issues like Harry Hole or Erlendur. Horst’s style matches his hero’s: methodical and reserved, and with a laser-sharp focus on the details of each murder case. These procedurals are as fascinating as they are thrilling, and Wisting’s reserved demeanour towards the horrors of murder only adds to the drama.

Wisting has already been adapted for television, portrayed by Valkyrien actor Sven Nordin. The Katharina Code marks the 12th installment in the series, but it is as good as any place to start.

In the Norwegian coastal town of Larvick, detective William Wisting dusts off a cold case that has obsessed him for 24 years, a missing persons case that is as impenetrable as a locked room murder. One day, Katharina Haugen vanished from her home, leaving behind a perplexing scene for the police to interpret: a bouquet of fresh roses, a packed suitcase, five books removed from her library, and most puzzling of all… a puzzle on the kitchen table. A series of numbers were arranged on a sheet of paper with the symbol of a cross.

After all these years, the hidden message of the crime scene still nags at police and cryptologists alike. The alibis of her husband, Martin Haugen, the neighbours, friends and family all checked out and there was no forced entry. Katharina simply vanished. On each anniversary since her disappearance, Wisting returns to cast a fresh look, hoping for a break. Part of this ritual is to reconnect with the still bereaved Martin Haugen, who has become a close acquaintance of Wisting’s, even a fishing buddy.

Coincidentally, the National Criminal Investigation Service (Kripos) has organised their own new cold case division. Their first case is another missing persons case from around the same time as Katharina’s, a kidnapping that was never resolved wherein the culprits left a ransom note but never picked up the money. As happens with cold cases, new technology used on the ransom note has come up with a hit: Martin Haugen.

Meanwhile Martin, the common link between the two disappearances, has himself vanished, and so Wisting goes looking for him. When he does finally show up, Kripos investigator Adrian Stiller recruits the reluctant Wisting to go on another fishing trip with Martin to coax a confession out of him while wearing a wire.

Adrian Stiller, the cold case group’s complex and shadowy head, is a persistent, red-eyed insomniac with devious ways. He specifically enlists Wisting’s daughter Line, whose reputation as an investigative reporter is as impressive as her father’s police career. She is eager to help and soon begins connecting some dots. Wisting must keep mum with his daughter about Martin being the suspect as well as his reservations about Adrian Stiller, while showing to the group that he is not too compromised to execute the fateful fishing trip.

Wisting’s quiet brooding and compassionate dedication to work and family and his fiercely independent daughter Line, are qualities which will appeal to fans of the Scandinavian favourite Wallander. The William Wisting series is steeped in authentic procedural detail that only a former detective like Horst can provide. Wisting’s careful questioning of Martin and Line’s rigorous investigations occurs on a parallel track that is riveting in its method.

As the fishing trip veers towards its dark culmination, you look over the shoulders of Wisting and Line all the way, as Horst provides intimate and generous insight into psychological questioning techniques and an impressive grasp of journalism in the age of social media.

If you are new to William Wisting, then put this Petrona-nominated book at the top your TBR. If you are already a fan, the good news is that The Katharina Code is the beginning of a spin-off series dubbed the Cold Case Quartet.

If you crave bonus material on this author and this novel, read our recent feature with him. We’ve reviewed four other Wisting novels.