Vanish in an Instant 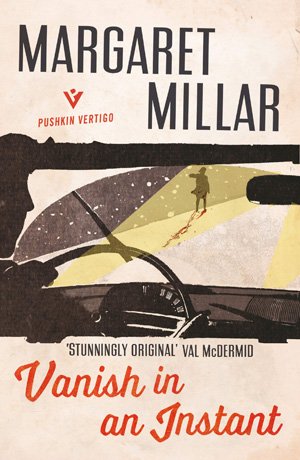 Written by Margaret Millar — Here at Crime Fiction Lover we have openly declared our love and admiration for Margaret Millar’s versatility and deft hand with suspense. Her novels are always finely-tuned and guaranteed to have you on edge. Sadly, most of her work has been out of print for a decade or two, or else only available in chunky volumes of collected works. So, it is encouraging to see her moving back to the mainstream with a reissue of the 1952 novel Vanish in an Instant thanks to Pushkin Vertigo. It’s one of her best-known works.

The story appears to be quite simple initially – a cut-and-dried case of drunken passion gone wrong. Claude Margolis is a womaniser, so when his body is found with vicious stab wounds to his neck, no-one is very surprised. What is surprising, however, is that his killer is Virginia Barkeley, an elegant and well raised doctor’s wife in the small town of Arbana, just 20 miles to the west of Detroit. Virginia is found wandering through a snow storm the night Margolis is murdered, blind drunk and covered in blood. She cannot remember what happened, but it appears that she was Margolis’ lover. Soon she is in police custody.

Virginia’s formidable mother marches into town to try and save her beloved child. She hires Eric Meecham to defend her daughter. Meecham is a local lawyer with one severe flaw: he cannot settle for the obvious explanation. He has to keep on digging and questioning, even when the answers get less and less convenient. Then, a strange-looking, soft-spoken man appears whose confession changes everything.

The book starts out almost as a comedy with the appearance of the overbearing Mrs Hamilton, Virginia’s mother, then morphs into a suspense novel with elements similar to a Golden Age murder mystery. But just a few chapters in, it becomes a study of psychological dependency and the drifting lives of losers. Millar was an acute observer of both individual psychology and social constraints, and she blends the two here with her customary page-turning abilities.

In other novels, the Canadian author Millar uses a more expansive style as she delves deep into her protagonists’ psyche. What is striking in this novel is how much is left unsaid in both dialogue and description. We are not privy to what goes on behind the facade and only get to observe the characters’ actions. In this respect, Vanish in an Instant is reminiscent of Jean-Patrick Manchette’s Fatale. (Interestingly, the French author modelled his work on American hardboiled detective fiction.) Every turn of the head, every hesitation, every furtive tear leaves an impression and makes us wonder. There is so much that is simmering, repressed, under the surface. Margaret Millar is certainly the queen of the minute details.

Another thing which makes her a very modern author, although she wrote the bulk of her work in the 1940s and 50s, is her ease with moral ambiguity. None of her characters are perfect, nothing is clear cut or black and white. There is one perfect quote in the book which illuminates Millar’s entire approach to writing crime fiction: “Where did you get the idea that there are only white saints and black sinners in this world?” Morality has its limitations and truth is complex and anything but comforting.

For more unusual and classic examples of noir, you could try Simenon’s Dirty Snow, or Patricia Highsmith’s The Two Faces of January.