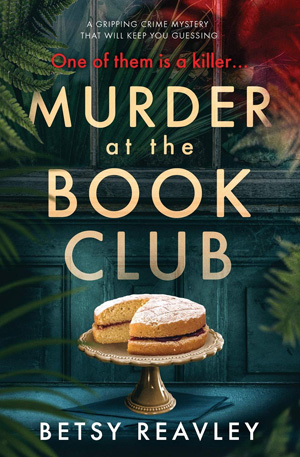 Written by Betsy Reavley — A group of nine women gather for a book club meeting in Cambridge. Can you think of a more innocuous premise for a work of crime fiction? There’s tea, homemade cake, even a bottle of wine… but all is not well with this lot. From the off, there’s an undercurrent that sets everyone on edge. Then, a mere few hours later, one of their group is dead. Who could have predicted that?

I suppose the title does give it away a little, but although the death of Toni Jones is murder, it isn’t actually at the book club. Her naked body is discovered, scattered with geranium petals, in a local park. Toni was a bit of a pain, it’s true, and had caused a scene at the meeting the previous evening. But who hated her enough to bump her off?

Toni did like to be centre of attention and was not shy in putting the other members in their place with a look or an acidic retort. Not surprising then that the other eight women at the aforementioned book club meeting are immediately under suspicion. However, as the police begin to dig into the victim’s past, some unsavoury secrets are revealed. Toni, it seems, wasn’t as white as she painted herself.

Then there’s another death and the police investigation, led by curmudgeonly DCI Barrett, ratchets up a notch or two. Could there really be a serial killer on the loose – something that second in command DI Palmer seems particularly keen on proving? As the police seek their perpetrator, the women of the book club seem over keen to keep their own counsel. As we get to know them better, all manner of skeletons begin tumbling willy nilly out of their closets.

It’s hard to classify this book. It’s not quite cuddly enough to be classed as cosy and doesn’t have enough depth to be a bona fide police procedural. There’s a good mystery element, but it doesn’t go full tilt there either. I fully expected at least one member of the book club to turn Miss Marple and start investigating the case herself, but perhaps these ladies aren’t crime fans? In fact, we never discover their reading tastes, save for a mini-discussion about AS Byatt’s Possession in chapter one.

This is a book with a large cast list and at times it gets a little confusing keeping track of who’s who. Having book club members called Marion and Maggie doesn’t help either, and few of them are even likeable – one works in a care home and there’s an upsetting scene where she takes out her frustrations on one of the elderly residents. Reavely provides a back story for each character, but they’re generally lightly sketched in rather than developed fully – meaning it’s hard to sympathise with the women and their woes.

Author Betsy Reavley has won plaudits for hard-hitting thrillers like Frailty and The Quiet Ones, and has gathered a loyal fanbase writing standalone tales which fit into the domestic noir genre. With Murder at the Book Club she seems to be having fun and throwing a knowing wink the way of her readers. As such it’s more of a lightweight read that isn’t too taxing. This novel is probably not for you if you like something to get your teeth into, but it is an ideal choice for a book club and I can imagine many a lively discussion between sips of tea and nibbles of cake.

For some cosy crime fiction, check out our Five of the Best from the USA. For more nefarious goings on in Cambridge, give Nine Lessons by Nicola Upson a try.