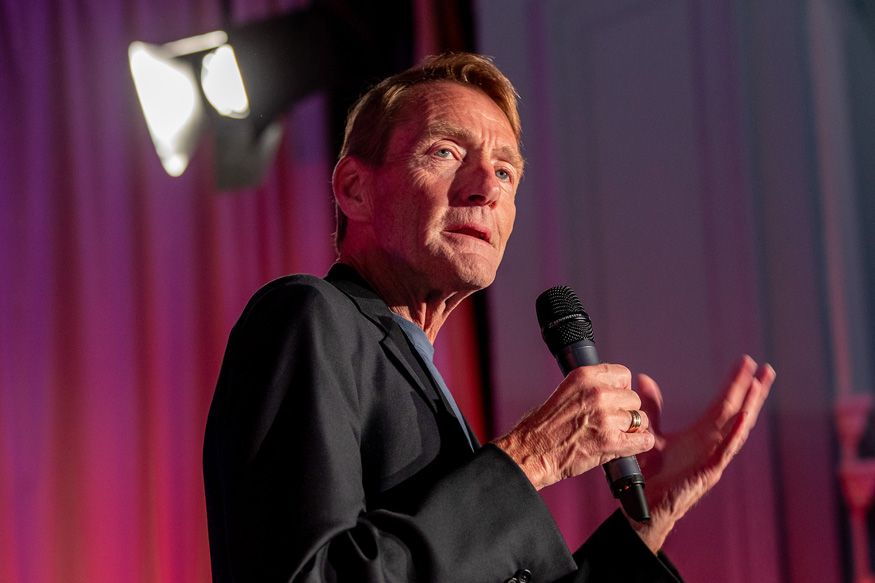 What gives the Theakston Old Peculier Crime Writing Festival in Harrogate a different vibe every year is that the author chairing the programme changes. It keeps it fresh and interesting, and it brings the crowds back year in, year out. For the 2018 event, held 19 to 22 July, Lee Child (pictured) put together a compelling line-up to showcase the diversity of homegrown and European talent, and also brought in the American heavyweights John Grisham, Don Winslow and Laura Lippman, and Linwood Barclay from Canada.

Harrogate is also a favourite because authors on the most part don’t hide themselves away is a green room; they mingle on the lawn and in the bar, some for the full three days. Child was generous and kind – posing for a thousand selfies with charm – and greeting friends old and new for a chat and to make sure they were enjoying the festival.

There was one striking exception. After picking up the ninth Theakston Old Peculier Outstanding Contribution to Crime Fiction Award on the opening night, John Grisham wasn’t seen again until he appeared at the Royal Hall in interview as a special guest with Child, where he was the only author to charge £1 to sign a book. However the £300 million author did publically thank his loyal readership over the years, saying: “Because of you, the readers, people like myself and Lee Child are lucky enough to do what we do. Thank you very much.” 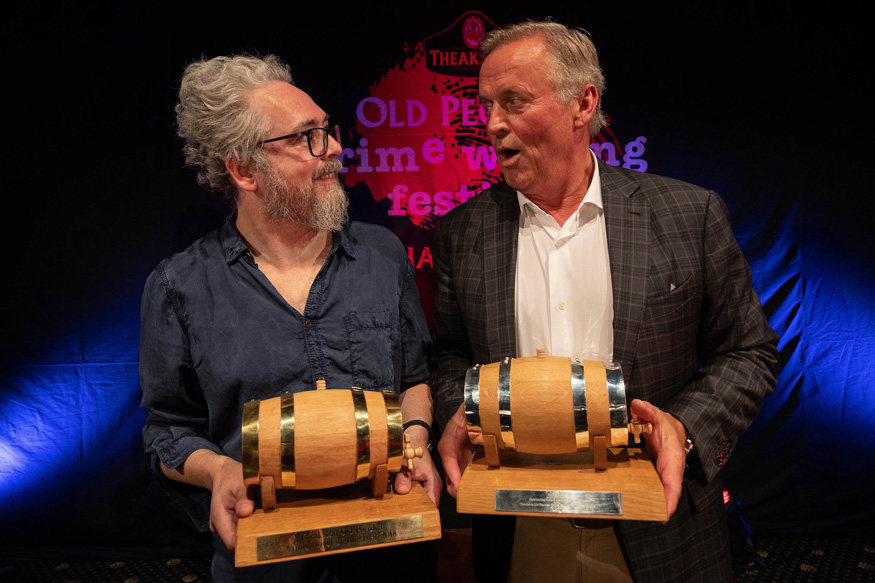 Also on the Thursday, Stav Sherez (pictured above) collected the Theakston Old Peculier Crime Novel of the Year Award for The Intrusions from sponsor Simon Theakston and broadcaster Mark Lawson. The book was described as “a Silence of the Lambs for the internet age” by Ian Rankin and acclaimed by critics for its echoes of Emile Zola and influences from Graham Greene to Dostoyevsky.

Sherez spoke about how social media offers a new vein of storytelling and criminality. He said that with all the static and scatter of TV and phones, everything is impinging on our consciousness and you don’t have time to think. “So many great crime writers have come before us that have used all the great plots – Christie, James Ellroy – it’s good to have new criminality to deal with. But it’s not only criminality, the internet is affecting politics, it’s affecting elections, it affects our kids and us.”

There was plenty of light entertainment away from the panels. The Fun Lovin’ Crime Writers band fronted by Val McDermid with Mark Billingham, Chris Brookmyre, Luca Veste, Doug Johnstone and Stuart Neville, gave a blistering performance of rock and pop crime standards with a crime influence, including Watching the Detectives and Sympathy for the Devil.

Let’s meet the panelists
Television host Richard Osman chaired a crime version of Room 101 where authors Mark Billingham, Laura Lippman and Martyn Waites pitched to have their crime fiction hates consigned to the bin. Let’s hope it catches on – Billingham called for and end to one-star reviews, and Lippman for books in which a beautiful woman dies and a man feels bad about it.

Sherez continued his discussion about social media and its impact on crime writing with Denise Mina, who won the crime novel of the year award at Harrogate in 2012 and 2013, at the first panel of the festival. Mina described crime novels as social novels, reflecting what is happening in our world.

Other panels explored authors drawing on personal experiences from jobs, home cities, favourite places and the rather clichéd ‘write about what you know’. Joseph Finder, who was recruited by the CIA but refused the offer, has used social media and technology as an obstacle in his book The Switch. His hero is forced to go lo-fi in order to avoid surveillance by mobile phone and CCTV technology. Fiona Cummings, a former Daily Mirror journalist draws on the emotions of the tragedies she has reported on, rather than use specific cases and families for entertainment in her books. The spy novelist writing the follow-up to the BBC’s hugely successful adaptation of John le Carré’s The Night Manager, Charles Cummings, admitted that he was targeted by MI6 and was caught in a honeytrap and then resisted the call-up.

New blood
A traditional and eagerly anticipated reveal is Val McDermid’s new blood line-up because her predictions so often hit the mark. Past picks include Eva Dolan, Liam McIllvanney, Kate Rhodes and Abir Mukherjee, who all joined a panel called What Happened Next chaired by Child. Last year one of McDermid’s tips was Jane Harper for The Dry. Say no more. This year’s debut talents are Dervla McTiernan, CJ Tudor, Stuart Turton and Will Dean – who lives in a wooden house in a boggy clearing at the centre of a vast forest in Sweden and used the place as his setting for Dark Pines.

Andrew Taylor, author of the best-selling The Ashes of London, chaired a discussion on writing historical crime fiction with Antonia Hodgson, Joe Kanon, SJ Parris and BBC radio presenter Simon Mayo whose debut is an account of the true story of a group of American soldiers imprisoned in Dartmoor in 1815. Kanon suggested that historical crime books give us an escape from contemporary life, as the whole narrative arc is available.

One name that came up in several panels was Donald Trump, notably in The Truth Behind the Crime session. Not a week goes by without more revelations in a post-truth world, and this is pertinent for crime fiction at the moment. 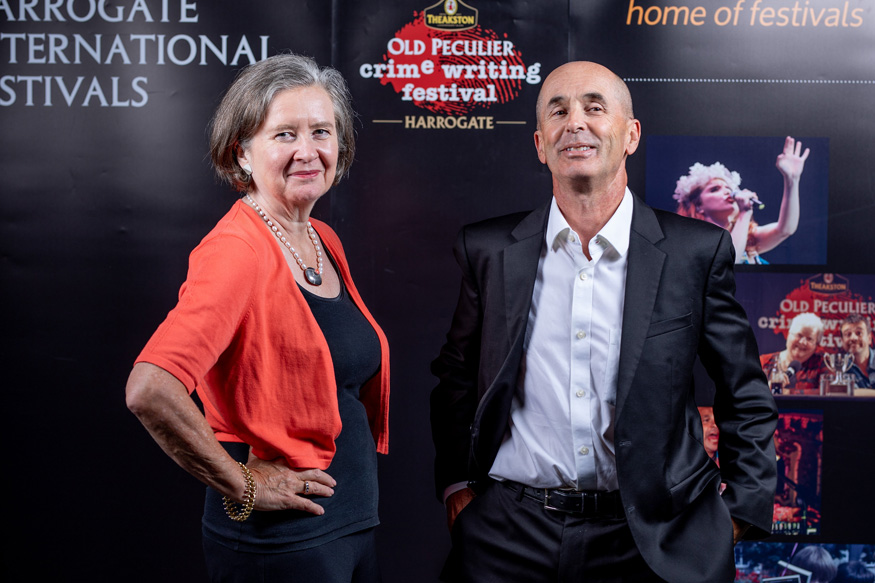 Social justice was high on the agenda too. American author Don Winslow’s first proper UK appearance, in a highly charged interview with NJ Cooper, offered an inspirational take on this. His assertion that all drugs should be legalised ignited heated discussions in the bar afterwards. Winslow, who tweets to Trump on a regular basis and recently offered $25,000 for any video footage of children inside US Immigration detention centres, wrote The Cartel and Power of the Dog to highlight the dirty war on drugs that is not working. He said the US, Europe and Britain are all culpable and gave a passionate argument that the answer lies in socialisation and to address the root pain that causes addiction.

On the last morning Ann Cleeves, who publishes her last Shetland novel in September, revealed she is planning a series set in north Devon where she comes from. You hear a lot of breaking news in Harrogate. Another big story was the announcement of Jo Nesbo’s next Harry Hole novel, Knife…

You can read about last year’s festival here.

By crimefictionlover
As crime fiction lovers, we all know there’s nothing better than settling down with a new book. These days, however, there is a wealth of well scripted crime shows to attract our attention too, many of them based on books that we know and love….
Features

By crimefictionlover
We had no idea how popular the Crime Fiction Lover Awards would be when we launched them last year, but they’re back for 2022 and nominations have closed. Now it’s down to the final six in our Best Crime Novel category and as a crime…
News

By crimefictionlover
BBC Maestro and Crime Fiction Lover are offering readers an inflation-beating 20% off a subscription to BBC Maestro. Until 10 November, you can subscribe to the entire online learning bundle for £88 – the normal price is £110. Click here to subscribe. This will give…