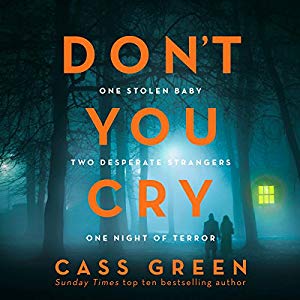 Written by Cass Green, narrated by Lisa Coleman, Anna Bentinck, Huw Parmenter and Richard Trinder — This exciting new psychological thriller from Cass Green, a popular YA author, deals with the power of maternal love and is her third thriller for adults.

The audio version reviewed here is a hybrid of a traditional audiobook read by a single narrator and one in which all the dialog is spoken by actors playing parts. Each chapter of Don’t You Cry is written from the point of view of one of four characters, and the actors, who are all first-rate, read the entirety of the chapters in their character’s point of view, regardless of who is speaking. This was an effective way to keep track of the story and in a way it’s much less jarring than having a group of actors reading lines as in a radio play.

Nina is a divorced English teacher living with her 12-year-old son Sam in a suburban area of England. Sam is about to go on holiday in Provence with his father Ian and Ian’s new partner, the considerably younger Laura. Nina is preoccupied by her resentment and grief over the dissolution of her marriage and the impending separation from her son.

At the book’s outset, she’s in a restaurant awaiting a blind date. When he arrives, late, he almost immediately propositions her. She’s so shocked, she chokes, and her server Angel’s timely use of the Heimlich maneuver saves the day. At least near-death is a sufficient reason to cut this disastrous date short. Leaving the restaurant, Nina again thanks Angel, says she has a supremely appropriate name and that she wishes she could do something for her.

This turns out to be a classic demonstration of be careful what you wish for. In the middle of the night, Nina is awakened by someone knocking at her front door. She assumes it’s Sam, too apprehensive about the trip and coming home to be with her. But it’s Angel, carrying a gun. She comes across as one tough cookie. And, soon thereafter, Angel’s brother Luke arrives with blood on his hands and an infant under his coat.

What follows is the longest night of Nina’s life. She hears fragmentary news reports, which reveal that in a nearby town a young mother has been murdered and her baby kidnapped. Though she fears the worst, Nina is helpless. The brother and sister have disconnected her phone, taken her cell phone, and left her with no resources. But before they take her phone, Sam does call, wanting to come home, and as much as that is Nina’s heart’s desire, she orders him to stay with his father.

If Nina is a bit of an agonised mess, trying to think of ways to escape with the baby, Angel is implacable and anticipates Nina’s every ruse. The character of the brother is especially strong, as he veers between caring and desperation, and in the chapters he narrates, he quite convincingly sounds on the verge of mental collapse.

Nina tries to negotiate reasonably with this difficult pair, encouraging them to be on their way and to leave the baby with her. For her, the baby’s fate is uppermost and it’s a difficult job keeping him quiet – which may have inspired Green’s title – getting him fed, and finding diaper substitutes. Ultimately, she must make a risky visit to a 24-hour convenience store. But even there, Angel has so terrified her about the possible fate of the baby that Nina dares not reveal her situation.

Green maintains a high degree of tension throughout this long night as the balance of power between the siblings and Nina shifts agonizingly. However, between Nina’s incessant worrying about the baby and tormenting herself for having to tell Sam he couldn’t come home, she grows a bit tiresome. I would have liked Nina to have had a more nuanced motivation and a few more emotional notes to hit, though as the story proceeds, Nina shows real courage against a somewhat cardboard foe.

For me, the novel’s strongest characters are Luke and Angel, who have both strong motivation and the great virtue of unpredictability. Despite the few minor issues that troubled me, most aspects of the plot and characterization are solid, and it’s a good listen.

Read our interview with Cass Green about her love of audiobooks – Don’t You Cry was released on audio first. Or, check out one of her previous thrillers reviewed here, The Woman Next Door.