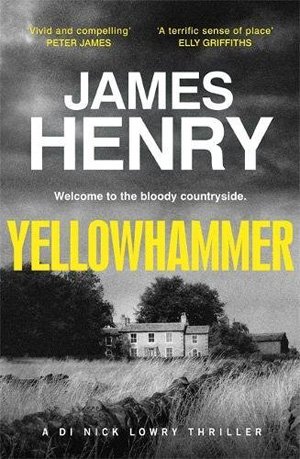 Written by James Henry — It’s the little things that make you feel old. Hearing a familiar song on the radio and realising it is now 40 years since it was in the charts… spotting one of your much-loved toys in an antiques shop… reading a novel set in the 1980s.

The latter example is pertinent in the case of Yellowhammer, which takes the sultry summer of 1983 as its setting. We’re in Essex, and there’s not a fake tan or white stiletto heel in sight. For this is the county’s lesser-known rural side, where a double death soon has the local police in a pickle. The first demise is that of Christopher Cliff, a university lecturer who has made a name for himself as a television historian. His death appears self-inflicted, using an antique shotgun. Nothing to see here?

The second victim is more of a puzzle – a man found next to the railway line at the edge of the Cliff’s property. There’s very little blood and just a small puncture mark on the body. Who is he and how did he meet his end? Both of these questions are answered pretty quickly, but why on earth was mild-mannered, unassuming accountant Peter Darnell in the area at all?

Cliff’s assorted children and stepchildren, and their two cousins, were playing nearby when all of the drama occurred. In fact, 12-year-old visitor Alan found the body near the train tracks. They’re a strange bunch, and Cliff’s daughter and step daughters in particular seem pretty unmoved by his death. Cliff’s wife Suzanne was away from the property when he died, and she’s not being entirely honest about her whereabouts. And then there’s the thorny matter of a Lovejoy-style rogue of an antique dealer who is also being a little miserly with the truth…

The author’s no-nonsense style is in keeping with that of Lowry himself. Here is a copper who has to solve crime the old-fashioned way, with none of that fancy new-fangled technology that makes the job so much simpler for modern-day police officers. Lowry is something of a loner, separated from his wife Jacqui, who is beginning to regret the affair which broke them apart. That particular plot strand hits a jarring note in a book which, in the main, flows along nicely.

The slow plod of a realistically-drawn police procedural is enlivened by what the main characters get up to out of work time. Kenton and Gabriel’s afternoon out to the beach for a spot of windsurfing provides a beautifully rendered laugh-out-loud moment in a book that contains plenty of dark introspection, played out in a setting that fits it perfectly.  This is the second book to feature Lowry and his crew, following Blackwater, and this author has also written several DI Jack Frost prequel novels (including Morning Frost, which we reviewed in 2013). Yellowhammer works perfectly well as a standalone, with hints at the back story which make you want to order the first book to catch up.

This is a book that is faithful to its time period and a modern-day readership may be somewhat shocked by the sexism and homophobia contained within its pages. They may not be palatable, but they’re true to the early 1980s and add to the sense of authenticity that Yellowhammer has in spades.