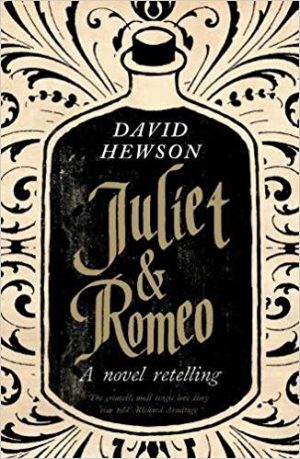 Written by David Hewson — Violent gangs roaming city streets looking for trouble. Murder. Illicit love. Poison. Suicide. And what amounts to the sale of a human being. It’s hard to argue that Shakespeare wasn’t a crime writer, and these elements come to the fore in thriller writer David Hewson’s re-imagining of Romeo and Juliet, a story more often thought of as the pinnacle of romance.

It’s a wonderful recasting of a story that itself had been reconceived several times. According to an author’s note, the fundamental story appeared in a volume published in 1476, which a Venetian writer adapted in 1531, with a subsequent version in 1562 that was translated into French, then into a poem in English, which was the version Shakespeare used in creating the play, published in 1597.

In the spirit of a story that has repeatedly evolved to fit its time, Hewson has changed some things. Most notable is the ending, which will give purists fits, but as the author points out, what is the point of writing an adaptation if you don’t adapt anything? He’s also updated the emphasis to dwell much more on the characterisation of Juliet. She’s a self-actualised, practical young woman, while Romeo is a bit of a dreamer, a little fuzzy around the edges. She knows what she wants and it is definitely not the forced marriage to the older Count Paris, a successful Florentine businessman, that her father has planned. “So that’s the role Count Paris will perform,” Juliet challenges her father. “Not so much my husband as your proxy son. I marry him because it’s good for business.”

Clearing out the underbrush of Elizabethan-era language and putting more modern words in the characters’ mouths creates a much different experience than seeing the play. Each stands on its own – the classic and the renewed and revitalised novelisation.

Hewson has set his version of the story in Verona in 1499, at the birth of the Renaissance. New art, new ideas, new discoveries, the New World, energised people. Juliet, in particular, wants to throw off the old restraints and love whom she would, regardless of the ancient quarrel between the Capulets and the Montagues.

In his brilliant adaptations Macbeth: A Novel and Hamlet, Prince of Denmark: A Novel, Hewson teamed up with Shakespeare scholar AJ Hartley. These experiences have served the writer well, because even though Juliet & Romeo is a solo effort, he penetrates to the core of Shakespeare’s characters and situations in a way that brings new meaning to the familiar.

You know the story. Verona’s Capulet and Montague families have a long-standing quarrel. Juliet, the only child of the Capulets, meets Romeo, the only child of the Montagues, and the young people fall in love. Romeo’s friend Mercutio is murdered by Juliet’s cousin Tybalt, and Romeo takes revenge. Banished from the city, he abandons the young wife he married in secret. Meanwhile, her parents entreat her to marry Count Paris. To escape this marriage, she takes a draught Friar Laurence gives her that puts her into such a deep sleep that it mimics death… but wait until you read the new ending.