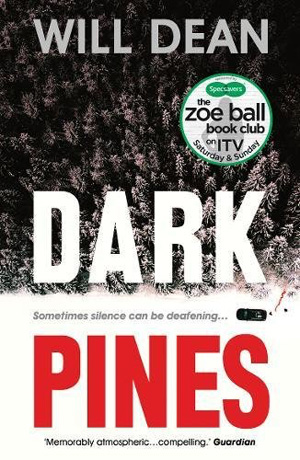 Written by Will Dean — Tuva Moodyson hates the woods. And that’s too bad for her, because she lives in Gavrik, surrounded by the Utgard Forest – several hundred square kilometres of boggy muskeg and pines. But it’s not that. It’s more to do with the fact that her father was killed by an elk – the Swedish equivalent of the moose. It sent her mother off the rails a bit, and damaged Tuva too. As Dark Pines opens, a giant elk is staring down at Tuva’s truck and it chases her out of the woods in reverse.

Elk are the least of her worries, really. Tuva is a living in Gavrik because she was able to get a job on the local paper there. She’d rather be in London or Washington, working at the Guardian or the Post, but her mother is slowly dying in a hospital in Karlstad, which is a couple of hours away by car. She wants to write news, she wants to be near her mother, and this is the compromise.

When a hunter’s body is found shot dead in the forest, Tuva gets her opportunity. Because she has a budding friendship with one of the junior police officers, she even has an inside track on some of the details. And, as luck would have it, her editor gives her the story. There were two shots to the body and the victim’s eyes were scooped out. That strange snippet of information stirs things up because the MO mirrors three unsolved murders from the mid-90s. Why has the killer returned? Or, is it a copycat? Tuva sets out to find out, but almost straight away meets with local opposition. People in a small town like Gavrik don’t like bad news written up in full-on investigative style.

Debut author Will Dean evokes the atmosphere of late autumn in rural Sweden just like a native Nordic noir writer. It’s hunting season, for a start, and we learn all about shooting elk. The bugs are still out, but the cold is seeping its way into the ponds, pools and mossy bogs as the verdant splendour of summer rots away. There’s something rotten at the heart of this little town as well, and when another murder is reported Tuva is on double time trying to get on top of the story and maybe even solve the case herself. It could be her ticket to big-time journalism.

Like Salander or Miss Smilla, Tuva is a strong female lead but also an outsider – technically, because she’s not from Gavrik, and figuratively because she is deaf. Furthermore, she’s bi-sexual, a category that’s not recognised in the town. The entire story is related from her perspective and there’s no unreliable narrator nonsense going on here. The descriptions she gives are accurate – you’d expect no less from a news reporter – and cover everything from keeping her hearing aids dry and in working order to the shape of the phallus on the sickening troll doll someone has anonymously sent her.

If that sounds weird, wait until you meet the characters in the woodland village near where the bodies were found. They’re all very suspicious. There are two backwoods sisters who make wooden Nordic troll figurines to order. Tuva is convinced they are trying to freak her out. There’s a creepy taxi driver, and a ghostwriter who works for celebrity clients and also likes to broil cattle skulls. An ex-army man lives there too, who is now an animal rights activist. Then there are Hannes and Frida Carlsson, who are almost normal in comparison. Good, wholesome, old school Swedes. Everyone in the enclave happens to be a deadeye shot, and Hannes is the head of Gavrik’s big and popular hunting club. He’s the one Tuva has her eye on.

There are one or two lapses of continuity in this mystery. At one point, Tuva watches a suspect hide their shed key so that she can search the outbuilding for clues later on. She does this, letting herself in with the key, but is interrupted by the shed’s owner. She hides under the worktop hoping not to get caught. But why doesn’t the shed owner notice the key has been removed when they go into the shed? There’s another loose end when the police search a house for a woman’s body. Big news, you’d think, but Tuva doesn’t seem interested in this and we never really find out what happens.

You may not even notice these things, though, because Dark Pines is so fluidly plotted and so well told it just pulls you along chapter by chapter. The whole story takes place over the course of about a week and feels very immediate. Perhaps that’s because Will Dean’s characters – especially Tuva – are so evocative. Perhaps it’s because he knows how to throw a twist. Or maybe it’s just because the atmosphere is brilliantly conjured. If you’re into your Scandinavian crime fiction then read it. Dark Pines was written by a Brit but there’s no difference really.