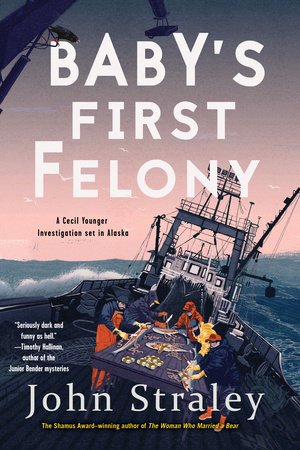 Written by John Straley — Let me introduce you to Cecil Younger, investigator for the public defender’s office in Sitka, Alaska, and star of a series of novels written by an author who is himself retired from the same job.

Younger is married to Jane Marie, is in his late 50s, and looks after Todd, a middle-aged man with Asperger’s syndrome. Blossom, his teenage daughter, also lives in the family home. His professional clients, many of whom are repeat offenders, are made up of the poorest members of Alaskan society, and their crimes most often run to domestic violence, drink and drugs. David Ryder, an African-American man in his mid-40s is the public defender, and he directs Younger’s investigations. Some time ago the pair of them came up with a simple guide for their clients, which they called Baby’s First Felony, or BFF. It’s a list of dos and don’ts when being questioned by the police that aims to prevent clients from making matters worse for themselves.

One of those clients, nicknamed Sweeper, indicates he wants to ‘seek employment with the city’, which means he wants to become a police informant. Younger is dispatched to change his mind. One of the first edicts of BFF is never to do this – snitches have no friends, they are hated by other criminals and get no respect from the police either. Sweeper is confident he can strike a deal. He claims he has information about missing teenager Melissa Bean, and believes she has been murdered. When Younger returns to his office, he finds Sweeper has been released on reduced bail and that his girlfriend, Sherrie Gault, also a repeat client, has been arrested for the murder of Bean.

Gault becomes their client and at the end of their first interview she slips Younger a note asking him to go to a certain address to receive a box. The place turns out to be a kind of squat, with rumours of prostitution attached to it. It’s also where Thistle, a school friend of Blossom’s, has been staying after running away from home. At this point Younger’s personal and professional lives collide, as Blossom is drawn into a criminal conspiracy that will have devastating effects for a number of people.

Baby’s First Felony has an unusual structure. There are no chapters, only parts 1 and 2. Part 1 is the main story, narrated by Younger, as he recounts the events of previous weeks during a court case in which he is the accused. His crimes, and the reasons for his actions, are revealed gradually through his narrative. This is a great approach, but it does grow tiring and a little confusing. There are no natural places to put the book down. Baby’s First Felony is too long, and too dark a book, to read in one sitting.

Part 2 is little more than an epilogue.

At the squat, Younger finds the box contains $50,000 and an ambiguous note, which seems to suggest the money be used to have Sweeper killed. The cash and threats, plus street rumours that Sherrie Gault is behind a new potent strain of meth hitting the city, all suggest that she has graduated to the big leagues.

I hadn’t read any of the Cecil Younger series previously, and the cover blurbs suggested a lot of whimsical humour. You might find it similar to Timothy Hallinan’s Junior Bender series or Colin Cotterill’s Dr Siri Paiboun mysteries, set in Laos. For instance, the advice contained within the BFF is frequently hilarious, and the scenes where Younger attempts to teach Todd which jokes are appropriate for which social setting manage to be funny as well as sympathetic.

The tone of Baby’s First Felony varies dramatically and moves unexpectedly to a very dark places, which makes for uneven reading. One scene, about half-way through the book, in which a young girl who has been drugged and forced into prostitution is summarily killed made me put the book down. I wonder if I hadn’t been reviewing whether I would have picked it up again. Baby’s First Felony offers some powerful writing too, and is a book that I have thought about frequently since finishing it. Perhaps it will be the same for you.

Also see John Straley’s Cold Storage, Alaska, which has similar levels of whimsy but is more even in the storytelling.

By Vicki Weisfeld
Edited by Judy Penz Sheluk — Moonlight and Misadventure is the third short story anthology from Judy Penz Sheluk’s Superior Shores Press, and there’s lots here to like. For this collection, she’s attracted some of the best known and award-winning shorts masters from the US…
KindlePrintReviews

By RoughJustice
Once again, Hard Case Crime has dug deep to unearth another forgotten book by the MWA Grand Master Westlake. At some point the well will run dry but there is so much enjoyment to be had from reading this caper that we must wish publishers…
KindlePrintReviews

By Vicki Weisfeld
This is the second of William Baer’s novels featuring private investigator Jack Colt of Paterson, New Jersey. Going by the title, you might assume this is part of Akashic Books’ short story series that includes Milwaukee Noir or Amsterdam Noir. In fact, Akashic published a…