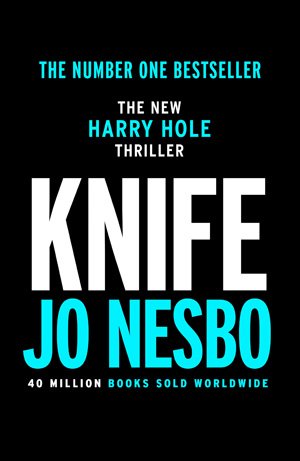 Norwegian Jo Nesbo and his English language publisher Harvill Secker have announced the next book in the author’s popular Harry Hole series. That’s the good news for Harry Hole fans. The bad news is that you’ll have to wait nearly a year because Knife is scheduled for release on 11 July 2019.

The announcement was made by the author this afternoon at the Theakston Old Peculier Crime Writing Festival, being held 19-22 July in Harrogate, West Yorkshire. Not much has been revealed about the story yet, but if read the last novel in the series, The Thirst, you may recall that there was a big loose end… Perhaps that will be the basis for this mystery.

What we do know is that Harry will wake up with a hangover, and with his hands and clothes covered in blood. He will come up against an old adversary, and face his darkest personal challenge yet.

With over 40 million copies sold, the Harry Hole series is one of the most popular examples of Nordic noir there is. Knife will be the 12th book, and if you’re new to Harry Hole or have only dipped your toe in once or twice in the past, you can read our full rundown on the series here.

2 – Harry is missing a digit from one of his fingers. You can find out more about that if you read The Snowman.

3 – The Snowman was turned into a film, released in November 2017, with Michael Fassbender as Harry Hole. It didn’t quite capture the atmosphere of the books, but it’s worth watching for Val Kilmer’s performance in the role of Katrine Bratt’s alcoholic father.

4 – Harry’s character is based on a combination of Frank Miller’s Batman, and Jo Nesbo’s former football coach Nils Arne Eggen. More is explained in our interview with the author.

5 – Unlike most successful series, new Harry Hole books only appear every two. However, the author placed the series on hiatus from 2013 to 2017 to pursue other ideas, the best of which were his throwback Oslo noir books Blood on Snow and Midnight Sun.

You can pre-order a copy of Knife below.