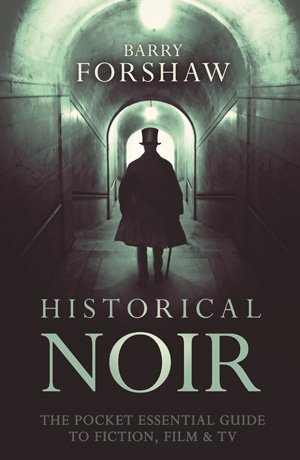 Written by Barry Forshaw — The pocket essential guide to fiction, film and TV in the sub-genre of historical noir from one of the crime genre’s leading experts does exactly what it says on the tin. Despite this compendium being small enough to fit in your back pocket, there are around 200 writers covered in the slim volume. This reveals just how crowded, though not saturated, the market is and demonstrates the huge appetite for stories featuring sleuths operating in previous eras.

Back in the 1970s Ellis Peters topped the historical crime rankings with her medieval monk Brother Cadfael (who went on to have his own TV series) followed 20 years later by Lindsey Davis and her Marcus Didius Falco books set in ancient Rome. Informer and reluctant agent Falco and more latterly his daughter, are still going strong and this guide features a potted biography and analysis of her work and an interview with Davis. She reveals that sandals, sunshine, scandal and mystery offer huge scope for fun.

This sets the format for much of the entries, some with interviews, some not and offers insights into how writing historical crime fiction is approached and why authors and readers love stepping back into an imagined age. Susannah Gregory admits that the research involved in producing medieval mysteries is exciting and absorbing and others that research is the best part of the job.

Rory Clements says that Elizabethan England with its endless conspiracies and the spy network of Sir Francis Walsingham is a brilliant canvas for a crime thriller, used in his John Shakespeare series. So was 1930s Cambridge with its breeding ground for a generation of spies for his Tom Wilde books.

And as Imogen Robertson notes, using the genre to investigate previous lives throws interesting lights on our own age. Robin Blake adds that there is pleasure to be had from plotting the effects of emotions we can all recognise – passion, greed, anger and justice. Peter Lovesey agrees that he is most intrigued by things that haven’t changed as human nature hasn’t altered in thousands of years. However, Michael Ridpath points out that the 1930s are a perfect time to set a thriller, as the stakes for individuals and the world have never been higher.

Historical Noir is divided into 12 chapters by era from the ancient world to the 1970s. These are devoted in the majority to novels, with prominent TV and films thrown in. In an introduction, Forshaw sets out his definition of the sub-genre and reveals that during his time as a CWA Ellis Peters Historical Dagger judge, every other novel seemed to be set in the Tudor period. He believes CJ Samson’s success with his Matthew Shardlake novels gave publishers the confidence to expand the genre, which now represents a healthy slice of the thriller market.

There’s a brief entry about early practitioners such as Josephine Tey but the main chapters are devoted to contemporary writers. Some of these authors span various time periods and so they have one entry in their principal period.

Two writers: Andrew Taylor and Robert Goddard are mentioned in several chapters and have their own chapter at the end, due to their multiple periods and settings. One of our most garlanded authors, Taylor, whose most recent novel The Fire Court is the second set in Restoration London after the Great Fire, says he finds it hard to restrict himself to a single period and he writes them partly as an excuse to find out more. Goddard agrees and says there is a wide range of fascinating stories and writers to explore.

Of course, extensive as this pocket guide is, there isn’t scope for Forshaw to include all the many historical crime writers out there. It is inevitable that there will be disappointments – I would have liked to see included Jane Thynne for her 1930s Berlin novels and Sara Sheridan for 1950s Brighton. There are some personal favourites of Forshaw that are on repeat mention. Several of his previously published interviews repeat information, so could have done with an edit.

Many authors reveal the authors they admire and Historical Noir is an excellent guide for you to discover other writers using the eras you enjoy exploring and rediscover old favourites. If you are fascinated by skullduggery in the past this guide is worthy of a place on your bookshelf or back pocket and will ensure you are never lost for which historical crime novel to read next.