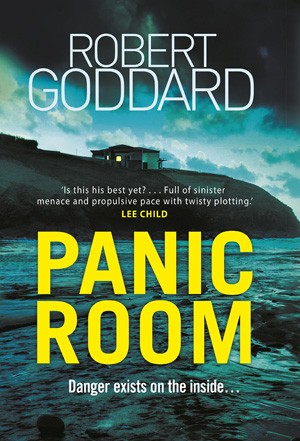 Written by Robert Goddard — Panic Room is Robert Goddard’s 27th thriller, this time based in Cornwall, a county renowned for its misty legends and remote locations. It promises one of his trademark, tightly constructed plots, which are methodically planned. However, as Goddard told us in his recent interview, sometimes the story turns to take this master planner by surprise. Perhaps this spontaneity is what helps keep the suspense dynamic, spurring us on to keep turning the pages late into the night.

Don Challoner has just been fired from his estate agent job. When his ex-wife Fran, a lawyer, offers him £2,000 for a weekend’s work measuring up a luxury clifftop house in Cornwall, he can’t afford to turn it down. Don soon discovers to his cost that such a hefty fee doesn’t come without a big price to pay in aggravation, and even risks to his life.

The uninhabited mansion is not what it seems. For a start there’s house sitter Blake in residence, a young woman with a past she wants to put behind her. And Fran hasn’t been honest with Don about the owner of the luxury pile. It’s not a woman looking for a quick valuation for her divorce, but her husband, rogue pharma entrepreneur Jack Harkness, who is wanted in the US for fraud, bribery and embezzlement. He’s hitting the headlines and fighting extradition.

Within moments of his arrival at the house, Don discovers a steel door behind a mirror that is locked from within the void. If this is a panic room, what’s it for and what is inside?

Before Don and Blake have much time to wonder about this sinister development, dangerous men looking for Harkness’s missing millions, including a Russian hitman, arrive to put the frighteners on.

They have no choice but to investigate what Harkness is up to and find out what nasties are in the panic room. The clues seem to connect a woman who has been missing for decades, the mysterious death of a child, and a place in Blake’s past she has run from all her life.

As the two become loyal friends as well as detecting partners, we learn much about them via their descriptions of each other, actions and inner thoughts. Blake’s first impressions of Don are of a 50-something, rumpled slightly paunchy bloke, whilst Blake is first seen dripping wet and naked after a dip in the pool, her hand on her hip as she demands to know who he is. There’s an empathy and rapport that develops between the self-confessed feckless Don and the more courageous Blake, without a sexual element. They are the backbone that drives the story.

Blake has the local knowledge that Don lacks. She knows that Harkness’s childhood enemy is Wynsum Fry, a witch who believes he killed her brother and is apt to cast spells on anyone who crosses her. Fry, a smelly old hag with her Cornish dialect and cackling ways, is a cliché too far, despite her use as a plot device.

While the protagonists or goodies are well drawn with flaws and foibles, the large cast of sinister baddies are caricatures without any good bones in their bodies. Harkness the billionaire has charm, he’d have to or he’d not be heading up his empire. But as the body count rises in a bloody pile of brutal slayings amid a kidnap and blackmail, the chapters count down from 10 to zero like a doomed Bond film bomb.

For more crime fiction set in Cornwall try In Her wake by Amanda Jennings and SK Tremayne’s The Fire Child, or Hard Light by Elizabeth Hand.