The Lies We Told 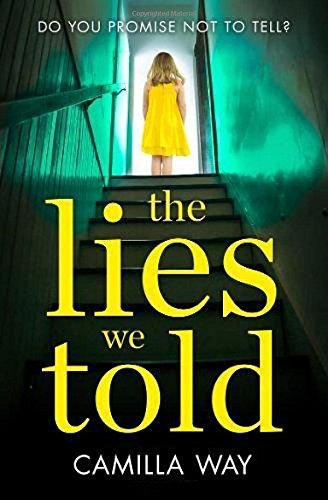 Written by Camilla Way — Lies… a little word that can have huge consequences, as evidenced in this stand alone by the author of Watching Edie, one of our recommended reads in 2016. Clara and Luke are living a perfect life. They both work for a magazine publishing company in Soho, London, she as a writer on a financial title, he heading the design desk on an architectural quarterly. They’ve been living together for six months and they are in love and blissfully happy.

Then Luke goes missing on the day of an important job interview at work. He’s been preparing for it for weeks, has left his phone and passport behind and hasn’t taken any cash out of the bank. Where could he be? The police seem stumped too, so Clara enlists the help of their mutual friend Mac and they begin their own investigation. Big mistake, because as they dig into Luke’s comings and goings, Clara begins to realise that the man she loves isn’t as clean cut and wonderful as he appears…

This modern-day quest for the truth is interspersed with narration from the 1980s, where a beleaguered mother is being subjected to a reign of terror by her young daughter. Hannah may still be at primary school, but complaints of bullying and violence set her apart from the other youngsters. She even beheads the family budgie and sets fire to the bedroom of her babysitter’s son. It doesn’t take a hardened crime fiction reader to realise that things are not going to improve.

But what on earth could link these two, seemingly unrelated, plot strands? It’s a conundrum that will stay on the back burner for a good deal of The Lies We Told and you’ll find yourself stopping every now and then to try out possible solutions, then discard them as another juicy little snippet of information is revealed. Suffice to say that no one is quite what they might seem here…

The missing Luke is a shadowy figure, brought to life by the things that are said by his friends and family. But their descriptions clash and it’s hard to get a handle on him. Has he run off or has he been abducted? And if it’s the latter, who on earth would do such a thing? It’s a long and winding road before we are treated to any plausible answers.

There’s a picture-perfect, airbrushed quality to some of the cast of characters which can feel a tad overdone. Truth be told, Clara is naive to the point of being downright annoying and as yet another unpalatable truth comes to the surface you almost want to give her a good talking to. She’s an amalgamation of Pollyanna and Jiminy Cricket and really needs to get herself into the real world. Rant over.

Camilla Way is a dab hand at creating plausible scenarios and solid, believable dialogue, but while Watching Edie delivered a knockout punch that earned it a five-star rating on this site, The Lies We Told is more of a light sparring, handbags at dawn kind of a read. Yes, there are revelations aplenty, but they’re of the ‘oh yes, I thought so’ variety and are unlikely to surprise all that much. That said, this is a book that holds the attention while not overtaxing the brain too much. An excellent choice for the growing holiday read pile.

For more missing persons, give Paper Ghosts by Julia Haeberlin a whirl. Or grab a copy of Cara Hunter’s Close to Home.