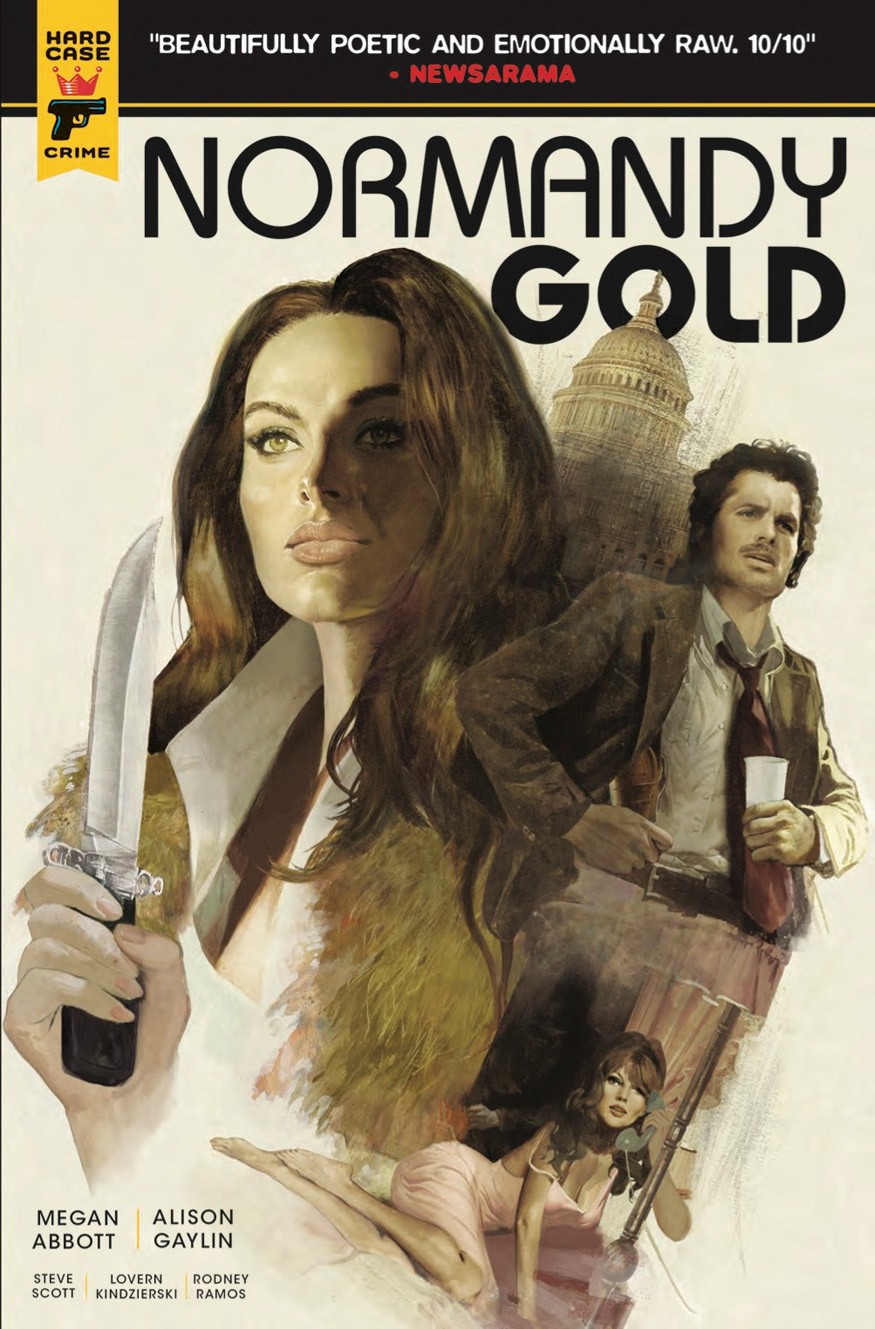 Written by Alison Gaylin and Megan Abbott, drawn by Steve Scott — If the #metoo movement and the unsavoury antics of America’s pussy-grabbing president have once again brought the patriarchal abuse of power into the spotlight, then Abbott and Gaylin’s graphic novel set in the 1970s reminds us of its evergreen nature.

Normandy Gold the book brings together the first eight issues of the comic book series. Normandy Gold the character is tall, beautiful, fierce as hell and a sheriff in rural Oregon. The story begins with a phonecall from her sister. Lila and Normandy have been out of touch for too long, and Lila is excitedly calling from Washington, DC to tell her sister about the relationship she’s having with an older, powerful and married man. The call is cut short by the entry of a man, but not disconnected. Then Normandy hears her sister being murdered.

Taught by her late step-father to be self-reliant and correctly suspicious that the local cops won’t work the murder of a young prostitute too hard, Normandy travels to the capital to find her own answers. Her only ally in the big city is Detective Paul Sturges, who was taken off Lila’s case by the top brass. He gives Normandy her first lead – the name of Lila’s madam is Felicia Vane. Vane has a list of high-class and connected clients, so Sturges warns Normandy she can expect little help from the cops. That’s just fine because our heroine has her own kind of justice in mind.

Normandy herself is straight out of the 70s grindhouse groove – a white Foxy Brown who knows the effect she has on men and will absolutely use it to get the truth. She’s brave, angry and resourceful, and if Gaylin and Abbott don’t show us much else of her character, well, it’s enough for a graphic novel. The book is very much aimed at adults. Normandy’s investigation involves getting herself on Vane’s roster and screwing Lila’s old clients. Both the dialogue and the images are sexually explicit and appropriate to the story being told. The artwork by Steve Scott and Rodney Ramos artwork is naturalistic with clean, bold lines and bright colours. They get the dark and dangerous tone just right too, without pushing too hard on the retro elements, as many might be tempted to do.

The book is action-packed from the very beginning, but a little repetitive in the first couple of chapters as Normandy moves from one bed to the next without making plenty of threats but not significant headway in her investigation. I question whether I would have persisted at this point if I had been buying the monthly comic. However, things kick into gear in the second half of the story as Normandy gets closer to her suspect. The writers also introduce a new story element in to the mix, and without spoiling things, the comparisons to 70s conspiracy movies like Three Days of the Condor begin to make sense.

The neat package is rounded off with some extras such as the covers from the monthly comic, an interview with the authors, a fantasy casting of Normandy Gold the movie, and character studies by the artists.

You can find out more about Normandy Gold in our interview with the authors. Also check out our feature from 2015, when we listed 10 of the best classic crime comics.