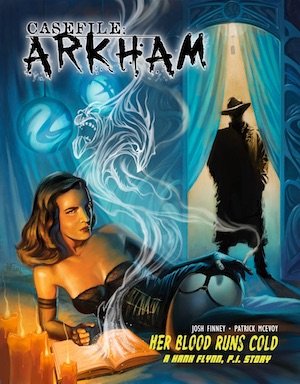 Written by Josh Finney, drawn by Patrick McEvoy — This new crime-horror crossover graphic novel gets started with a bang. In post-World War II Massachusetts, in the fictional city of Arkham, one of the first things ex-marine Hank Flynn has to do after getting his PI license is gun down his friend Edward Derby.

Derby comes from one of Massachusetts’ grandest families and his fall, even before his last fateful encounter with Flynn, has been dramatic. His self-destructive streak saw him frequently drunk, broke and in the gutter. A recent relationship with a woman seemed to bring him some stability, but his family’s refusal to acknowledge a marriage to somebody from the wrong side of the tracks put paid to his recovery.

However, even that cannot explain why Derby should charge into Flynn’s office, late at night, brandishing a revolver and ranting like a lunatic about ‘shogoths’ and mind control. Spurred on by his girlfriend Glynda, herself no stranger to the occult, Flynn decides to take a closer look into what drove his friend mad.

The police detective investigating Derby’s death is forced to let Flynn go after Derby’s corpse goes missing from the morgue – no body, no crime. Before he does he tries to warn Flynn off the case. There are rumours that Derby had been indoctrinated into a cult and he had spent some time in an asylum after being found wandering naked through the woods at night.

If you’ve an interest in pulp fiction, you may have already spotted some references to HP Lovecraft, the influential supernatural horror author who wrote for Weird Tales magazine. While Her Blood Runs Cold contains many nods to Lovecraft – not just in the names of the various characters or locales, but also in its themes of madness and cosmic dread – this graphic novel is also an homage to the golden age of American hardboiled fiction, and to its foremost practitioner, Raymond Chandler.

Writer Josh Finney has incorporated many of the key tropes of Chandler’s writing. Flynn is an obvious knight errant – a tough man in a tough business, but with a strong moral code and a commitment to the truth, however unpalatable. Asenath Derby, Edward’s wife, is a convincing femme fatale, every bit the match of The Maltese Falcon’s Brigid O’Shaughnessy. And, in a neat flourish, Finney refers back to earlier literary versions of the femme fatale, who were enchantresses and could exert almost a supernatural hold over men.

Artist Patrick McEvoy’s black and white illustrations are shot through with classic imagery. Flynn is a square-jawed leading man, almost a double for Robert Mitchum in his fedora and two-piece suit. Encounters either take place in speakeasies or deserted moonlit streets; the visual influence of classic film noir cinematography is evident in the striking close-ups and shadowing.

The publisher, an American indie, relied on crowd funding to produce Her Blood Runs Cold. Perhaps the extra time taken to make the graphic novel allowed its creators to iron out any wrinkles, or maybe they’re just very talented. Either way, their book is an unqualified success.

For a touch of horror in your crime fiction try The Smiling Man by Joseph Knox or John Connolly’s The Woman in the Woods. And there’s a scoopful of the Lovecraftian in Sherlock Holmes and the Miskatonic Mysteries by James Lovegrove.