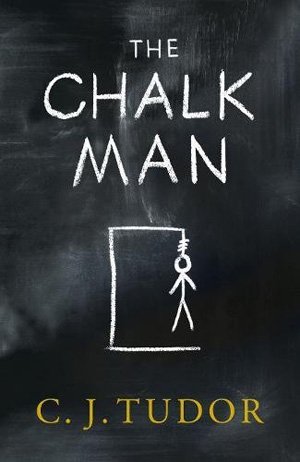 Written by CJ Tudor — CJ Tudor’s highly anticipated debut – sold to 39 territories, and with a film deal rumoured to be in the works – is set in a fictional idyllic small town of Anderbury, somewhere near Brighton. Its structure is the kind of complicated psychological thriller, where events from the past resonate into the present, which has become very popular recently.

In 1986, five young friends are on the cusp of adolescence. They include Eddie, who narrates the story; Fat Gav; Metal Mickey; Hoppo; and Nicky Martin, the only girl in the gang, and whom Eddie is developing a crush on. As a sort of secret code among themselves, they leave chalk marks on the ground around the neighbourhood. They are all excited about a visit to the summer fairground. For Eddie, the trip ends in disaster when the waltzer he is on collapses and a beautiful young girl is horribly maimed. He never really recovers from the shock and over that summer tensions simmering between the friends come to the surface. While the gang stay together, they are never quite as tight again, and over later years they grow apart.

Nicky’s father is a vicar who leads a protest group at the abortion clinic run by Eddie’s mum. Eddie’s father is beginning to develop Alzheimer’s disease despite still being relatively young. The gang are jealous of Fat Gav’s wealthy parents, and Eddie has started to shoplift in order to keep up appearances. The gang are also being bullied by Mickey’s older brother Sean, who seems to have it in for Eddie in particular.

The group dynamic of the gang is one of the strengths of the novel. It has been compared to Stranger Things, and I can see the resemblance to Stephen King’s stories It and Stand by Me. Each character has a clear identity, and the reasons for their friendship and subsequent falling out are convincing. CJ Tudor successfully captures that point in childhood when innocence is beginning to be replaced by experience, and the growing revelation that the world is a complicated, messy place where people, especially adults, cannot always be relied upon.

Sean drowns later in the summer while trying to retrieve his bike from a brook. Eddie begins having visions of him – are they dreams? Is it a ghost? Tudor is good at keeping us guessing – leaving chalk markings on the ground, just as the gang do between themselves. At the climax of the 1986 timeline, the trail left by Sean leads the kids into the woods where they find the dismembered corpse of the girl who was hurt in the accident at the fair.

Fast forward to 2016 and only Eddie, Fat Gav and Hoppo remain in Anderbury. Nicky left for university and never returned, and Mickey left under a cloud after a car crash driving Gav home from a party. He was over the limit and the accident left Gav paralysed. Gav runs a pub, Hoppo is a plumber, and Eddie is a teacher at the school he used to go to. He is single, drinking too much, and gets by with a lodger, Chloe, a young Goth girl.

The spark which reignites the mysteries of that summer in 86 is Mickey’s return. He has written to Eddie in secret with the news that he knows who murdered the girl and wants Eddie’s help to make a documentary film about it. Around the same time, Eddie begins receiving ominous chalk drawings. The first is of a chalk man with a noose around his neck. Despite his wish for the past to stay buried, it seems Eddie will finally have to face up to what happened 30 years ago.

The novel is structured with alternating chapters from the two periods. While this has some value in generating tension, as the chapters often end in cliffhangers, which aren’t resolved until the narrative returns to that timeline, it creates a significant problem for the story arc. We are more than half way through the book before the girl’s body is discovered. By that point I had been wondering for some time when the actual crime would be revealed. More than that, it leaves little time for the mystery to play out.

The result is that the storyline set in the present suffers. The events of 1986 are convincing, but they are also so complex that the author cannot convincingly resolve them convincingly in the second timeline. She ends up resorting to a range of authorial tricks which may leave you feeling frustrated and perhaps a little cheated. It is a pity because the basic premise of The Chalk Man is intriguing and the childhood experience is so well conveyed.

Looking for more fresh blood in the crime fiction world. Try one of the top five debuts of 2017. If you want to learn more about The Chalk Man, read our recent interview with the author.

By DeathBecomesHer
If December released a rash of Christmas-related novels into the crime fiction universe, it appears that January brings the snow. New Year’s Day is still a recent memory, but already in 2023 we’ve reviewed Cold People by Tom Rob Smith, set in the Antarctic, and…
iBookKindlePrintReviews