The End of Lies 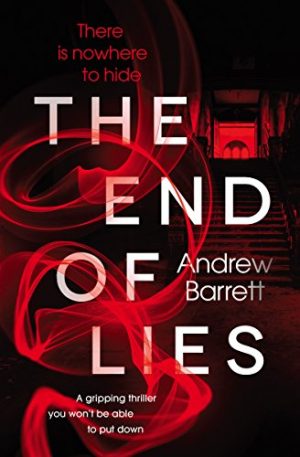 Written by Andrew Barrett — “How can you tell if you’re lying to yourself?” this crime thriller begins, and it’s a good question. Middle-aged librarian Becky and her police inspector husband Chris appear to have been lying to themselves for some time.

Becky and Chris have been planning a crime, if not a perfect crime, one they think they can pull off, that will allow them to escape from the North of England to a well-heeled retirement somewhere warm. To accomplish this, Chris will sell a stolen list of police informants to a notorious crime boss, appropriately named Savage. The high likelihood such a scheme will go wrong in any number of ways hasn’t prevented their planning from proceeding apace. That is, until our narrator Becky arrives home one day and finds Chris dead on the living room floor and a team of gangsters ransacking their house.

The gangsters want the list, Becky’s tears suggest she wants her husband back, and she can count on her best friend Sienna for help. The women aren’t sure how the £2 million promised to Chris will figure in. Savage tells Becky he gave Chris the first half of the money, with the rest due when the list is delivered. But where is the money now and where is the list? If Becky doesn’t find one or the other – from her point of view, preferably both – she is promised a gruesome death.

This is one of those things-can’t-get-any-worse stories, in which they always do, and has been provided with a loudly ticking clock. Becky is given one week to find the goods or Savage will kill her, well, savagely.

Understandably, Becky works hard to meet the criminal’s demands and, during her week’s grace period, benefits from some helpful coincidences and a great deal of luck. Something about Sienna, though, sets you wondering. She seems to know more than she should and appears in unlikely, but fortuitous places.

As a protagonist, Becky plays against type and most expectations of a librarian. For instance, she is foul-mouthed and profane. But she’s in an incredibly high-stress position, which may also explain some of her actions that are decidedly un-feminine, such as slapping Savage across the face – an action he suggests she not repeat. The stress comes out mainly in the form of frequent tears, but nevertheless, you can admire how she persists in putting herself in danger, trying to rectify the situation well after she has to.

Author Barrett does make nice use of Becky’s librarian training as she figures out some of the puzzles presented by her late husband’s secretive methods. At the end of the novel, he introduces an aspect of her character that had escaped me to that point and caused me to reevaluate what had gone before.

The writing style is straightforward and the plot is fast-paced. This seems to be Andrew Barrett’s first book with a female protagonist and perhaps doesn’t delve into the kinds of issues female characters face in the way that it could. He is a Yorkshire crime scene investigator with about a dozen previous novels in two series featuring CSIs under his belt. The End of Lies is a standalone and his first psychological thriller.