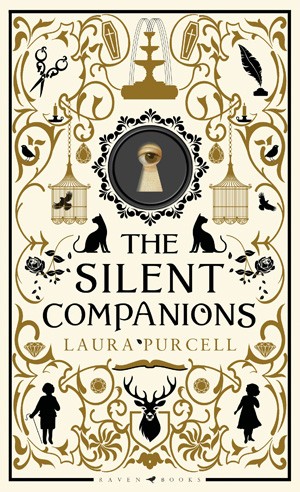 Written by Laura Purcell — Just in time for Halloween comes The Silent Companions, a Gothic ghost story or mild horror tale that attempts to follow in the wake of Shirley Jackson and Susan Hill.

Told in three timelines, we first meet Elsie Bainbridge in 1866 in St Joseph’s Hospital, an asylum for the insane. She is accused of committing arson and murder and has been left mute from the shock, while the sedation she takes helps her forget an earlier trauma. When a new doctor persuades her to write down her story the stakes are high. She could face trial for murder and the gallows, or be acquitted and live in the cold world outside without the comfort of drugs. Elsie starts to unravel her memories and write, fearful of what she will discover.

A year earlier Elsie is widowed just months into her marriage and must bow to Victorian mourning convention and stay hidden away in her late husband’s estate, the Bridge, to give birth to her child. She leaves the colourful salons of London in the season behind. The dank, depressing countryside is deep in mud, the carriage wheels sluicing through the clods and the horses’ hooves squelching. The tumbledown cottages have thatches flecked with mould and the damp, decaying mansion is a creepy Jacobean pile. As she views her late husband’s body in his coffin she sees splinters of wood embedded in his face.

Surrounded by hostile villagers and servants during this captivity, Elsie has only Sarah, her husband’s mousy and dull cousin, for company. She hears whispers about herself, that she murdered the new husband who had invested in her family’s match factory and changed his will in her favour. Most villagers, she learns from the housekeeper, are fearful of The Bridge, as they believe a Bainbridge woman during the Civil War was a witch and a former servant had met a sticky end in the hall. All her husband’s infant siblings who were born at the mansion died and this adds to the legend of a curse.

As the claustrophobia mounts Elsie is plagued by the sound of rasping hisses coming from a locked attic. While most of us would leave well alone, Elsie wants to know what’s in there. She and Sarah come face to face with a creepy painted wooden figure that looks just like Elsie did as a girl. It’s a silent companion, a dummy board used to amuse and trick guests in days long past. And there’s a diary from the 1630s written by an Anne Bainbridge that tells a terrible tale of witchcraft and superstition and the murder of a boy in the third timeline in the book.

There’s plenty more unsettling tales for Elsie to discover as the melodrama continues and she contends with hallucinations, hauntings, accusations and the ever present threat of madness and incarceration. Strange forces are at work to prevent her reading the diary, as the silent companions multiply and appear around the house, some resembling people she knows from the hall and village. By the time Elsie and Sarah realise the menacing figures are dangerous it is too late. They are vengeful and cannot be destroyed.

There are more uneasy tales, of skeletons discovered in the grounds, the deaths of infants, a gypsy’s curse, a mute girl regarded as a freak and Elsie’s own back story is full of horrors. Other unsettling happenings include the slaughter of an animal and a servant ‘s violent death. Purcell has thrown explicit Gothic elements at this by the coachload; the woman in distress and danger, the isolated location, a creepy, decaying house, swirling mists and damp, unexplained deaths, noises in the night, hauntings, curses, revenge, witchcraft, magic, religion, superstition, possession, madness, rumour, supernatural entities, forced actions, transitional time periods and a burning mansion. Whew. With the supernatural figuring so strongly, you may feel this book is not for you if you’re a crime fiction lover and like your explanations to be of the physical world.

Everything turns on a sixpence in the last seven pages, which seems too swift and sudden, the detail too scant. Across the rest of the 350 pages the scenes are drawn out as the tension is kept taut, but this hasty departure leaves too little time to reflect and you are likely to feel shortchanged.

If you love a Victorian murder with occult overtones try Oscar de Muriel’s The Strings of Murder and for contemporary crime with subtle supernatural undercurrents, find out more about George Mann’s Wychwood or Johan Theorin’s the Voices Beyond If you want some dark humour and demonic monsters you will get a laugh with your horror with Clive Barker’s The Scarlet Gospels And check out our super crime reads for Halloween