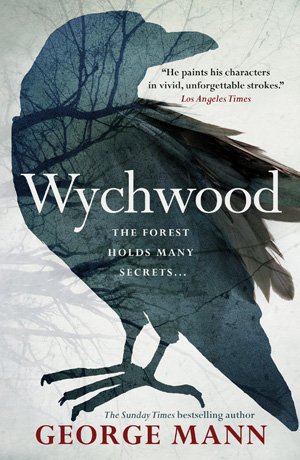 Written by George Mann — Wychwood is the first in a new series of mysteries by an author who in the past has created a number of alternative realities – Sherlock Holmes in a steampunk universe, Queen Victoria kept unnaturally alive well into the 20th century, and a Cold War set in the 1920s, for instance. Here he plays it down the line with a crime story set in contemporary Oxfordshire, though there is a hint of the supernatural and Saxon mythology has a role to play as well. In our interview with the author, he discusses this in more detail.

Elspeth Reeves has returned home to the quiet village of Wilsby-under-Wychwood to nurse her bruises and get ready for a fresh start. The end of a long term relationship and redundancy from her journalism job have knocked her confidence, but she’s a strong, resourceful young woman and when a story falls into her lap she has the vigour to pursue it.

Her mother’s house borders the local woods, and out for a stroll Elspeth stumbles across a police investigation. A young woman has been the victim of a ritual murder, found in the woods naked save for a cloak of white feathers and a crown of thorns. She is surrounded by seven dead ravens. There’s something about the image which seems familiar to Elspeth, and she later recalls the recreation of local legend she witnessed as a child. It was the myth of The Carrion King.

She also recognises the inspector in charge of the scene. Peter Shaw was a childhood friend, part of a close group who grew up together in rural Oxfordshire. They drifted apart when some, like Elspeth, left for University. The pair quickly renew their friendship, and Peter is agreeable to Elspeth tagging along on his investigation so that she can get some freelance journalism work with the local paper. It story into police procedural mode.

A local amateur dramatic society is recreating the same legend in a new play, and this is the obvious focus of the investigation. There are tensions between the cast and the theatre owners, and rivalries between the professional academics and hobbyist local historians advising the playwright and director, which complicate the investigation. The significance of the myth to the killer also remains a mystery. The Carrion King can be interpreted in many ways, so which one is personal to the killer? The question grows even more urgent as further corpses are discovered.

It is possible to work out the identity of the killer fairly easily before it is revealed, but Wychwood has many strengths and this shouldn’t spoil your enjoyment of the book thanks to its creepy atmosphere. The pacing is excellent throughout the investigation, but the climax does end somewhat abruptly.

The supernatural element to the story is  tangential enough not to spoil the book for anyone who prefers a mystery without any explanations from the beyond, while the gradual revelation of elements of the Carrion King legend creates an excellent Gothic atmosphere. There is a frisson of excitement and forbidding, especially as the killings work to their climax.

The characters are strong – Elspeth in particular benefits from the author’s close attention. Her situation allows George Mann to explore themes of loss and regret, and the importance of moving on. Hers is a hopeful story, and she stands in contrast with the killer, an individual never able to give up a long-held grudge. Wychwood is a good contemporary murder mystery, and an intriguing beginning to a new series.

For another crime story infused with mythological inspirations try The Visitors by Simon Sylvester.