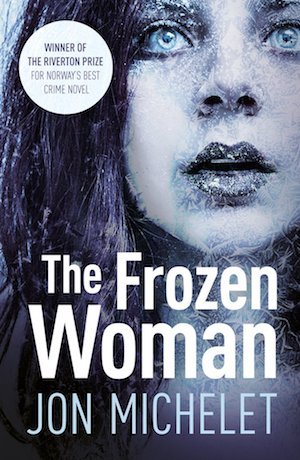 Written by Jon Michelet, translated by Don Bartlett — Not as well known as Jo Nesbo, Karin Fossum or Jorn Lier Horst, Jon Michelet is a hit in his home country. His novel Orion’s Belt was translated into English in 1986, and was adapted for cinema to become one of Norway’s best known action thrillers. He is also the author of a series of novels featuring the lawyer Vilhelm Thygesen, and The Fronzen Woman is one of them.

Thygesen started off serving in the police, has strong left wing political beliefs, and served 10 years in prison for killing a fascist. The police consider him an annoyance because he left the force under a cloud. It is hard for them to accept that one of their own could go on to commit murder, and then work as a criminal lawyer. He is now middle aged, far from prosperous, and has discovered a corpse at the bottom of his garden, frozen as a result of the cold Oslo winter.

Kripos detectives Arve Stribolt and Vanja Vaage determine that the woman was stabbed to death, but can’t identify her. She appears to have been in her 20s, of Eastern European origin, and Thygesen denies any knowledge of her. They are keen to link Thygesen to the crime, but reluctantly have to concede that he is unlikely to be the killer. Their theory is that the woman was a drug mule, punished perhaps for losing her cargo.

Then, a young man called Strand dies in suspicious circumstances. Just out of jail, he was part of The Seven Samurai biker gan, which Thygesen has defended in court. Is this the opportunity to link Thygesen to the murder that Stribold and Vaage crave?

From this point on, the narrative splits three ways. One strand is the investigation, and in particular Vaage’s continued interrogation of Thygesen. It is a story of setbacks and dogged persistence rather than inspired breakthroughs, and when they eventually identify the victim and the reason for her death it is more due to events outside their control than endeavour. But this seems like a realistic portrayal of detective work. Michelet pays a lot of attention to the changing relationship between the detectives themselves, and their chief suspect. In doing so he reveals aspects of their characters that a lesser writer might not explore.

Then there is the motorbike gang, their ongoing criminal activities, and the reason for Strand’s murder. The brakes cables on his bike were cut… but why? These scenes take place across Norway as the group splinters, and they give a novel that is otherwise without action or violence some drama.

The final storyline concerns an industrialist Strand was trying to extort. A bizarre series of coincidences made him vulnerable, and while all of this is peripheral to the main plot, perhaps the intention is to explore the economic and political climate in Norway. This subplot proves crucial in the eventual closing of the case.

The Frozen Woman is a little confusing early on. This is nothing to do with the translation, but is the result of Michelet’s refusal to be constrained by the usual mystery format. We are thrown in at the the deep end and are in the dark as much as the detectives. It is only in the final third of the book that you’ll begin to piece together the victim’s story. Relax and run with it, and you’ll find The Frozen Woman to be an enjoyable, complex, multi-layered story with particularly strong characterisation and atmosphere.