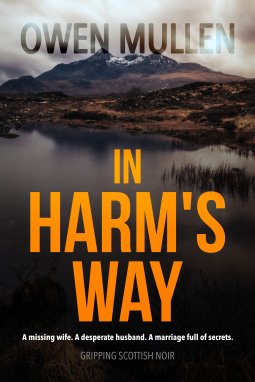 Written by Owen Mullen — Mackenzie Crawford has everything – a gorgeous home, a loving husband, wardrobes stuffed with designer clothes… and a drink problem. Her husband Derek, 20 years her senior, insists she can beat this, just cut back and have two glasses of wine a day but Mackenzie knows that’s not going to work. She’s trying hard to quit, but one day a trip to the supermarket shatters her resolve. Someone is watching Mackenzie and the shock of being stalked makes her turn to the bottle again. The trouble is, no one believes her.

Crime fiction is littered with the missteps and misdeeds of dysfunctional families and Mackenzie and her brother Gavin and sister Adele fit that bill perfectly. She’s the youngest and was always the golden girl, something which caused friction with her siblings. Adele dismisses out of hand her sister’s claims of a stalker because Mackenzie has always been a drama queen. Gavin is more interested in the arrival of his first child and doesn’t really take much notice of his younger sister’s disquiet.

Then a well-oiled Mackenzie causes a scene at a family party and storms off. A couple of days later she is missing from home, her husband Derek maintaining she’s run off with another man. At first the police are keen to downplay the disappearance. She’s a grown woman after all and had admitted to having a lover. But then they learn that Mackenzie has taken none of her designer clothes and has no cash or credit cards. Suddenly the alarm bells are ringing and rightly so because as a reader you’ll already know Mackenzie is in big, big trouble, being held prisoner in a dark and dingy cellar of a house in an out of the way woodland.

She is chained to a bed and mostly alone, but every now and then a strange hooded man comes and sits silently, watching her. Just like the man who stalked her, he dresses all in black and at first she tries to engage him in conversation, but then Mackenzie comes to a decision that costs her dearly, and suddenly a book that is already dark and disturbing takes the tension level up to 11.

Meanwhile, Gavin is trying to find his sister, much to the annoyance of her husband who wants to wash his hands of the woman he believes left him for the arms of another man, and Adele who maintains their sister will eventually return, the worse for drink, her tail between her legs. Gavin calls on the skills of an old five a side buddy, DS Andrew Geddes, a man known for his dogged determination. But even Geddes draws a blank – is there no hope for the poor woman?

The action plays out in and around Glasgow and the city is brought vividly to life in this enjoyable slice of Tartan noir. Author Owen Mullen is a meticulous plotter, adding layer upon layer like a brickie creating a wall and he pulls you right along with him for the ride. This is a novel populated with some pretty unlovable characters but somehow he manages to make us feel for them and never lose that driving momentum. There’s a major twist near to the end which I’d worked out quite early on, but somehow it didn’t detract too much from the reading experience.

This author is new to me, although we reviewed And So It Began, the first of a new series featuring former cop turned private investigator Vincent Delaney here on the site last year. You’ll like his no-nonsense style and flair for a quirky detour or two. A name to add to the ‘one to watch’ list.

For more Scottish crime fiction see The Photographer by Craig Robertson and you can also catch up with our interview with fellow Scottish author James Oswald.