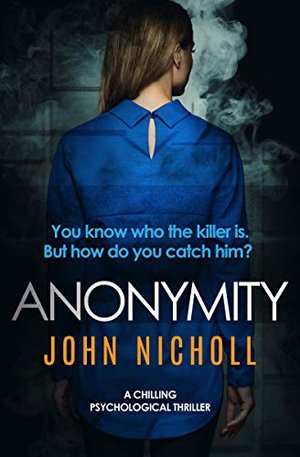 Written by John Nicholl — These days, there are myriad high-tech ways for crime fighters to do their jobs efficiently. Unsurprisingly, the same applies to the criminals themselves. Which is why the net has proved such a rich hunting ground for crime writers – take Chris Carter’s The Caller and Friend Request by Laura Marshall as just two examples. Now along comes John Nicholl with Anonymity, which takes trolling and stalking up another terrifying notch.

Author Mia Hamilton has found success with her raunchy romantic novels. She has a four-year-old daughter and a happy enough life in West Wales – until she begins to receive anonymous emails from someone who signs off as ‘Your Number One Fan’. The first two are deleted unopened, but the third catches Mia’s attention and she replies.

BIG mistake. This correspondent isn’t after a signed book or a name check in Mia’s next novel. Instead, he demands she declare her love for him in an advert and on social media. If she doesn’t he will do something drastic to young Isabella. At first Mia is inclined to dismiss the message, until he says he knows where she lives and attaches disturbing photos to prove it.

Things then begin to escalate, with the anonymous emailer asking for naked photos of Mia. He warns her not to contact the police and threatens both the author and her child. What’s Mia to do now? She turns to her sister Ella for help, but as the pair get together over a glass of wine to try to formulate a plan, it becomes clear that the stalker knows their every move…

So when they decide to share their story with an old family friend, a police office by the name of Gareth ‘Grav’ Gravel, the stalker is right on their tail. Fans of John Nicholls will recognise the name – we reviewed A Cold Cold Heart earlier this year and this is the fourth of his books to feature the Detective Inspector, who in Anonymity is a burnt out, alcoholic wreck of his former self. Still, he manages to rally enough to agree to help Mia, and to call in reinforcements in the shape of Acting DI, Laura Kesey. By now we readers know the identity of the man intent on ruining Mia’s life and as things take a chilling turn you’ll find yourself shifting ever closer to the edge of your seat.

Both Mia and Grav are addicts of sorts. She is relying far too heavily on the prescription painkillers given to her after she was treated for cancer, while Grav can’t get through the morning without a can or two of beer. He is still grieving the death of his wife and being at home on enforced leave isn’t helping either. At least he has something to occupy him as he directs operations from the sidelines, handing over Mia and her problems to his former colleague, Kesey. Her input gives the case new impetus but also spurs the stalker into ever more nefarious deeds. Some of them are real shockers, so be prepared!

There are a lot of good things to say about Anonymity. It has elements that are so familiar they make the plot seem plausible, Mia and Ella are well defined, and although this was my first meeting with Grav, I found myself liking him too – he’s a man coming to the end of his career (and his tether), who sees a last chance of redemption. However, some of the plot elements are so over the top they tip the balance into the implausible, putting the brakes on an otherwise engaging read. Overall though, this is a book that’s excellent in patches and definitely worth a gander.

Continue the stalking theme with No Place Like Home by Rebecca Muddiman or Neil White’s From the Shadows.