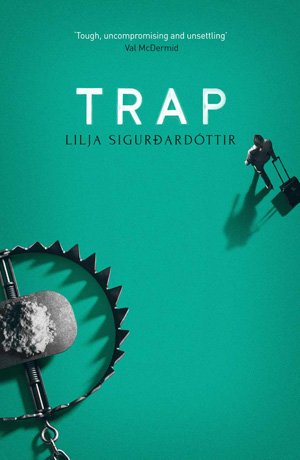 Written by Lilja Sigurdardottir, translated by Quentin Bates — Following her daring exploits in Snare, Sonja Gunnarsdottir is hiding out in an isolated California trailer park with her 10-year-old son, Tomas, far away from her native Iceland. She has escaped life as a drugs mule, hoping ex-husband Adam won’t find them. Adam, a corporate financier and drug trafficker, sends some thugs who eventually find her and snatch away the boy. If she wants to see Tomas again, Sonja must now return to Iceland alone and do Adam’s bidding.

Still in her summer shorts, Sonja is rescued at the airport in Reykjavik by her ex-lover Agla Margeirsdottir. It’s a complex set-up because as well as Sonja’s squeeze Agla was one of Adam’s financial partners when the crisis hit in 2008, and they both have questions to answer. With a huge overseas nest egg, she is laying low as she faces sentencing in court for market manipulation. Agla ultimately hopes for a happy family life with Sonja and Tomas, but Sonja’s mind is solely focused on getting her son back.

Back in the drug smuggling game, Sonja is resigned at her plight one minute, but determined to free herself the next. The author creates an unnerving and desperate atmosphere that never lets up as she suffers a series of increasingly tense ordeals. She agrees to one scheme after another, always hovering at the edge of entrapment. First she faces Mexican drug lord Carlos, who punishes disloyalty by feeding parts of his victim to his pet tiger, and then his wife Naty, who is not much better, but who does get Sonja one step closer to Tomas.

Now working for Naty and loaded with cocaine, Sonja recruits the help of customs officer Bragi, who agrees to one last scheme so he can retire to spend time with his ailing wife. After a nail-biting close call at the airport, Sonja earns access to Tomas but also receives a harsh beating by Adam’s henchman Rikki the Sponge. After an exhausting number of coercive deals and betrayals, first with Adam and then with Naty, Sonja’s final gambit is to ally herself with Sebastian, Naty’s lieutenant.

Meanwhile, Agla, who is the key to a huge fraud and money laundering case, hopes to secure her future via a secret deal made with Ingemar, the intimidating aluminium kingpin. They are orchestrating a complex debt scheme, and it seems Adam and his gang are being left out. But will all of this get past Maria, a investigator who is another strong female character determined to set her own terms in a male-dominated world? She has been investigating Agla ever since the financial crisis, and now she sees a chance thanks to the emergence of some secret tapes of Agla’s conversations.

In Trap, Icelandic author Lilja Sigurdardottir weaves another complex web of tension. Can Sonja completely free herself and create a normal life with her son? Will Agla do time, and just who has been taping her? Will powerful men destroy their plans, and what new element may emerge to entangle them further? Her evocative, urgent prose brands the characters’ dilemmas in your mind, often using the forces of nature as a mirror, a familiar device in Nordic noir. Sonja is described as a fish caught in a net and Agla’s dream of an enduring relationship with Sonja resembles two souls struggling together in a kayak on Iceland’s stormy, cold waters. All the key characters from her debut, Snare, return here in pleasing fashion.

Some unanswered questions and the novel’s short length bring this thoroughly engaging read to a frustratingly abrupt end, but nevertheless you’ll want more. Sigurdardottir provides a skillful combination of Nordic noir, hardboiled financial thriller and high-octane narco drama, filled with sympathetic characters that you can’t help identifying with even as they break the law.

For Icelandic crime fiction with a different tone, try the novels of Arnaldur Indridason.

By Sonja van der Westhuizen
Translated by Victoria Cribb — 2020 was a year of lasts for Icelandic crime writer Ragnar Jónasson. The Mist, the third in the Hidden Iceland trilogy, as well as Winterkill, the final Ari Thór novel, were released the midst of the pandemic. Instead of diving…
KindlePrintReviews

By Paul Burke
Writing in Ice isn’t a crime novel. Let’s get that out of the way. This is a non fiction book – a memoir focusing on the origins of Magnus Jonson, the Icelandic-American cop created by English author Michael Ridpath. It’s also a love letter to…