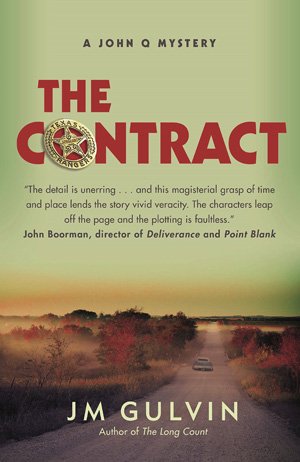 Written by JM Gulvin — The focus of JM Gulvin’s hardboiled crime series is Texas Ranger John Quarrie. He’s a Vietnam vet who rose to national prominence after he wrote to the president requesting clemency for a fellow soldier court-martialled for cowardice. In fact, Pious Noon, a black sergeant, had not been fleeing the front but had risked his life against Vietnamese snipers to bring the injured Quarrie to safety. In the end, Noon’s death sentence was commuted to five years in prison, but the very act of a white American writing in support of a black prisoner was so notable that Quarrie became known as John Q, as in John Q Public.

Gulvin is careful to present Quarrie in a positive light. His job as a Texas Ranger comes with its own mythology – a ranger is said to be steadfast and incorruptible and it takes just one to police a town, or so the story goes. Outside work he leads a simple life bringing up his son James on the ranch, which gives him a sense of steadiness and dependability. His continued loyalty to Noon, offering him work after he leaves prison, is further testimony to his morality. This is important, for Gulvin intends his creation to be the moral light which illuminates the rotten core at the heart of this story.

Quarrie is called into action after an armed robbery at a convenience store. He gets the drop on the two men responsible. One, named Henderson, surrenders, but the second, called Wiley, goes for his shotgun and Quarrie has to kill him.

Across the way in Wichita Falls, a man is found dead in his room. Strangely he has no identification, and a powder residue is found in the room. Quarrie is able to prove that Wiley and Henderson were in the same hotel at the same time and finds an empty bottle of Proloid medicine in their room. If taken in large quantities the drug can cause a spike in blood pressure sufficient to cause a heart attack or stroke. The medicine was dispensed in New Orleans and in the face of Henderson’s denials Quarrie has no choice but to go down to Louisiana to investigate.

There, instead of finding help for his investigation, Quarrie finds himself frustrated at every turn. He had hoped their shared history in the Vietnam War would have meant he’d get off to a good start with Lieutenant Colback of the city’s organised crime squad, but instead he’s met with a reminder that he’s out of his jurisdiction and a warning – or is it a threat? – that New Orleans isn’t like other cities and that he’s out of his depth.

Likewise he gets short shrift from the District Attorney and his chief investigator Gervais. Quarrie will have to solve this mystery himself, and he is frustrated again when the dispensing pharmacist claims patient confidentiality prevents him revealing who the Proloid was prescribed to. The kidnapping of the pharmacist alerts Quarrie to the fact that this case is bigger and more complex than it first seemed.

The case proves to be complex indeed. There are parts where it’s enjoyable and there is a lot of good writing on show. Individually all of the strands work – the lawman working in the dark, an overarching conspiracy which melds fiction with real life events including the Kennedy assassination, and an exploration of the Southern legacy of slavery and racism.

However, as a whole it is just too confusing and for large parts of the book you may well be floundering as much in the dark as John Q himself. It’s a frustrating experience, particularly early in the book, to read of characters in different scenes and have no idea of their purpose or how they relate to one another.

For more Texas-based crime fiction, here are some great recommendations.