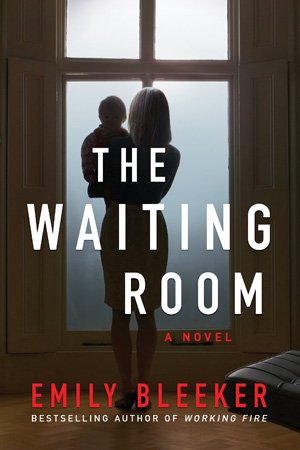 Written by Emily Bleeker — Children’s book illustrator Veronica is settling into family life in North Carolina with her new baby, Sophie, and it’s wonderful. Her husband Nick is supportive and pulling his weight and things are looking grand. Then, Veronica awakes one night to find both husband and baby gone. She decides he must have taken the baby with him to do some late night shopping for nappies. But then a text from Nick sends Veronica’s blissful world into free fall…

By chapter two of The Waiting Room, the ecstatic high of early motherhood has been replaced by the depths of postpartum depression. Veronica is now living with her mother, and the older woman appears to be doing all of the baby minding while Veronica seethes in another room. Where’s Nick? It’s going to be a while before we find out. Meanwhile, be prepared to weather the storm with a central character who is both unpredictable and unlovable.

It’s a hazardous move to give the woman at the heart of your story so few redeeming features. Veronica is snappy, needy, self-centred and obviously broken. Her mother convinces her to go to see a therapist, but even here Veronica seems reluctant to bare her soul completely. She feels like a failure as a mother and a human being and she takes out her feelings on anyone who tries to get close to her – even her long-suffering mother. She can’t even pick up her beautiful baby daughter. For a good 50 per cent of this book, Veronica is shown at her very worst and it’s hard to resist the pull of putting it down and trying something else.

That feeling isn’t helped by the snail’s pace of the story. Early on, the narrative wheels grind exceedingly slowly, lulling you into a soporific state at times. But beware that false sense of security – this bestselling author has a trick or two up her sleeve yet! Just when you’re likely to be feeling depressed too, Bleeker finally shows some writing chops and The Waiting Room sparks into life. But is it too little, too late?

There’s a break-in at Veronica’s house. She is deeply disturbed by this and is at a loss to work out why the police aren’t as bothered about the home invasion as she is. But the final straw comes when Veronica suffers yet another setback. Sophie is taken from right under her nose and she’s distraught when the police seem more interested in blaming the disappearance on Veronica herself. Which is where things finally get interesting and to reveal anything else would be a spoiler.

I get the feeling that The Waiting Room is destined to be one of those Marmite books you will either love or hate. The characters are nicely developed, if somewhat clichéd at times and the twists, when they come, are dramatic, but everything takes too darn long to gel cohesively. In Veronica, Bleeker offers a sadly realistic portrait of a woman in deepest turmoil. She’s a tortured soul and I felt bad for not finding it within myself to like her.

It’s certainly a different take on the psychological thriller, but the grindingly slow build up to any denouement is likely to put off some fans of the genre. If you can stick it out to the end, you’ll be rewarded with a neat bit of plot work which is likely to come as a complete surprise, but it’s scant reward for so much effort on the reader’s part. Emily Bleeker has already gathered a big fan base, but I doubt The Waiting Room will do much to add to it.

An infant is at the heart of A Baby’s Bones by Rebecca Alexander, and a mother with a baby takes centre stage in Claire Mackintosh’s Let Me Lie.