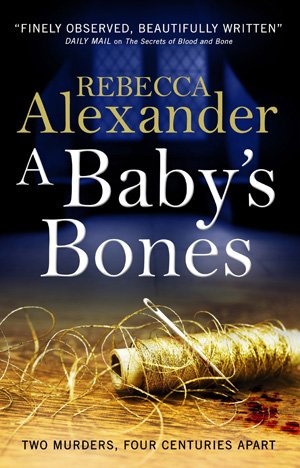 Written by Rebecca Alexander — Former psychologist Rebecca Alexander certainly knows how to mess with your mind, as evidenced by this debut novel which introduces archaeologist Sage Westfield and is set in the Isle of Wight.

Sage is pregnant and has recently split up with the married father of her child, although Marcus doesn’t appear to be taking the hint and is making a right royal nuisance of himself. It’s Sage’s first baby and she’s preparing for it alone, so a call to check out some bones found in an ancient well in the gardens of a cottage in the village of Banstock is all the more poignant. Covered up by the contents of a midden are two distinct skeletons – one is of a woman, tall for the 16th century, which is when the bones date back to, while the others belong to a new born baby of the same period.

The cottage belongs to the Bassett family, newly arrived on the island and they have enough troubles of their own. James Bassett is dying of cancer and spending time in and out of the hospice, his wife Judith is struggling to keep everything together, and their young daughter Chloe is acting up. The last thing they need is a major excavation going on in their garden, but Sage and her team of students have a job to do, and the more they dig – both figuratively and literally – the stranger their findings become.

There are two timelines in play here; tales centuries apart, running in tandem. The modern-day happenings intermingle with excerpts from a journal kept in 1580, by Vincent Garland, Steward to Lord Banstock. The two stories are connected… but how? When it occurs, their confluence is dramatic and the build-up to it will have you jumping at shadows – as mentioned earlier, this is an author who delights in playing with your emotions.

Setting the book on the little Isle of Wight is a nifty choice. It’s a place with a chocolate box image, where everyone seems to know everyone else’s business; a place that appears safe and secure. However, as things begin to unravel and a modern-day murder occurs, that comfortable complacency must be set aside.

Sage is an interesting protagonist and you get the feeling that if she wasn’t so heavily pregnant she’d be taking risks and getting herself into all sorts of bother, Indiana Jones style. Instead, she exudes a sense of frustration, which isn’t helped by the ongoing problem of Marcus and her budding romance with the local (admittedly rather hunky) vicar. Back in the 16th century, things are even more tricky, with witchcraft, suspicion, alchemy and even sorcery on the menu. Early experiments back then are in sharp contrast to today, where carbon dating and facial reconstruction are achieved by the wonders of modern technology, not slight of hand.

The interplay across the centuries is well conceived, although the strange cursive text that heads the 16th century chapters is difficult to decipher and can slow down reading progress. The meandering timelines are sometimes annoying – you’ll just be engrossed in one drama then thrown backwards or forwards in time to another – but at the heart of both strands is a murder mystery that will keep you guessing for a goodly portion of this book. Some parts prove more puzzling than others, but overall this is a novel that engages and entertains and I look forward to seeing how things develop in A Shroud of Leaves, which will be out next year.

If you like the archaeological angle, then try a Tempe Brennan book by Kathy Reichs. On the other hand, if it’s a hint of the supernatural you enjoy, we think John Connolly is the master there.