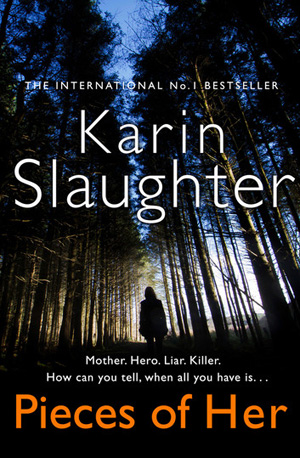 Written by Karin Slaughter — Do you remember much about your 31st birthday? No? Me neither, but Andrea ‘Andy’ Oliver’s 31st is about to stick in her memory forever.

Andy is a pretty ordinary woman. She tries, but usually she fails. In fact her life is littered with things she tried to do but didn’t quite manage. She is now back living at home with her mother Laura, a 55-year-old speech therapist who works with people recovering from strokes.

Laura’s pretty ordinary too, but she’s recently been battling breast cancer and Andy came home from New York to Belle Isle, Georgia, to give her mother support. An excuse, really. Andy was failing miserably in the Big Apple and it was the perfect opportunity for her to get away from the place.

They are having a quiet birthday lunch in a local diner when all hell breaks loose. A young man dressed like a western gunslinger appears in the restaurant and shoots and kills the two women who have come over to speak to Laura. What happens next will change Andy’s perception of life – and of her mother – forever. As Andy lies cowering in a corner, Laura springs into action. She grabs the knife which the shooter is now wielding after his gun has run out of bullets, turns the blade on him and, suddenly, the man is lying dead on the floor. It’s a deft move that looks well-practised. How on earth did Laura learn such things?

Up until now, Andy has led a pretty sheltered existence, but her mother’s actions have suddenly put them in the spotlight. The drama and violence in the diner set off a train of events that will eventually see Andy on the run from… somebody. The question is, can this little mouse of a woman find the courage to get her through what lies ahead?

This compelling plot strand in interspersed with a second, which is equally as dramatic and confounding. The year is 1986, location Oslo, and a high-powered international finance and business conference is about to take place. The main speaker is Lee Iacocca, the real-life CEO of Chrysler. All tickets have been sold for a panel which will see the outspoken Martin Queller, creator of the controversial Queller Correction, which is built upon the theory that economic growth is more important than the welfare of the poor and disadvantaged, pitted against his greatest naysayer, Professor of Economics Alex Maplecroft. But the woman sitting opposite him is an imposter, and Laura Juneau has another agenda altogether. What happens during the panel discussion has worldwide ramifications, but what could be the connection to Andy and her mother?

Pieces of Her is a book which contains a plethora of puzzles, and just when you think you’ve slotted all the pieces into place and the picture is becoming clearer, Slaughter tips the table and you have to start all over again. She can also conjure up a place and a period is surprisingly few words. Small-minded, small-town USA lives and breathes within these pages and the 1980s sections of the story are equally well rendered. This author feels right at home in the past, as evidenced in her 2014 novel, Cop Town, which was set in the 1970s and the Oslo scenes feel comfortable in their appointed decade.

Not content with creating the crime fiction version of the Cowardly Lion in the shape of permanently nervous Andy, Slaughter throws in another set of flawed but perfectly pitched cast members in the shape of the Queller family and their hangers on. There are not that many people to like in this book, but you’ll still find yourself rooting for quite a few of them as time passes.

This author has gained a reputation as a teller of tricksy tales and Pieces of Her is right up there with the best of ’em. There’s a fair chunk of death and desperation to be found within its pages, but also a surprising amount of lighter, laugh-out-loud moments to balance things up a little. A super standalone.

A special celebration turns sour in Sue Fortin’s The Birthday Girl, while pursuit is at the heart of Dead Woman Walking by Sharon Bolton.

The Little Lies by Valerie Keogh

By DeathBecomesHer
An eye-catching cover showing two sweet, tiny, baby shoes in the palest blue sets out the stall for this psychological thriller. The ‘little secrets’ of the title must include an infant, right? But Valerie Keogh is such a tease! She wrong-foots the reader from the…
iBookKindlePrintReviews

The Art of Death by David Fennell

By DeathBecomesHer
It’s a debut that was making waves before it was published – The Art of Death even made CFL’s list of books to look out for in 2021. But does David Fennell’s novel bring anything new to the serial killer party? It certainly arrives with…
iBookKindlePrintReviews

The Burning Girls by CJ Tudor

By DeathBecomesHer
After bursting onto the scene with a blistering debut, The Chalk Man, CJ Tudor has carved a nice little niche for herself in the psychological thriller zone with such books as The Taking of Annie Thorne and The Other People. The Burning Girls is her…