The Death of Mrs Westaway 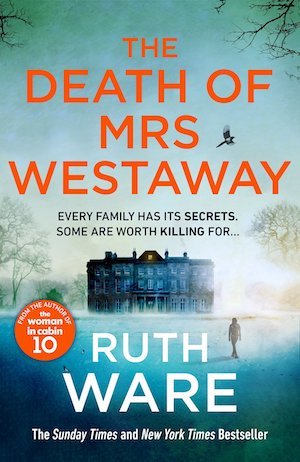 Written by Ruth Ware — Cornwall has proved a rich source of inspiration for many a writer. From Daphne du Maurier’s Rebecca to, more recently, In Her Wake by Amanda Jennings and Robert Goddard’s Panic Room, its rugged coastline and windswept landscapes have provided ripe pickings for evil-doing.

Let’s add The Death of Mrs Westaway to that list. Yes, it might begin in Brighton, but the real drama happens in Trepassen House in St Piran, Cornwall. Central to everything is Harriet Westaway, better known as Hal, who scrapes a living by reading tarot cards, crystal ball and the occasional palm in her little booth on West Pier in Brighton.

Hal took over the role of Madame Margarida from her mother, after she was killed by a hit-and-run driver outside the door of their tiny flat. Ever since, she has been struggling to make ends meet, and at a particularly low point she borrowed money from a loan shark who is now applying pressure for the money to be repaid.  Which makes an unexpected missive from a solicitor in Cornwall all the more welcome. Mrs Hester Westaway of Trespassen House has died, and Hal is mentioned in her will. Could a surprise inheritance be the answer to all her problems?

After a pretty scary encounter with the loan shark’s enforcer, Hal scrapes together her every last penny and buys a ticket to Penzance. The taxi from the station to Trespassen House leaves her almost broke and her unannounced arrival causes a stir. Mrs Westaway’s three sons, Harding, Ezra and Abel, and the curmudgeonly housekeeper Mrs Warren, are all taken aback by the newcomer and the tale she has to tell. She’s treated with suspicion and those misgivings are not without foundation because Hal is living a lie. She is the daughter of a distant cousin, not Maud, the Westaway family’s long-lost family member. She’s been surviving on her wits for years, but can she pull off such a great deception?

The answer to that question will keep you entertained throughout this cleverly plotted, utterly engaging book. You’ll come to love Hal. Small, tattooed and bespectacled she may be, but inside the mousy exterior beats the heart of a lioness – and she’s going to need all that courage to cope with what is to befall her. Death lurks around the shadowy corners of Trespassen, and why is ‘Help Me’ scratched into the dirty panes of Hal’s attic room?

Yes, there are distinct echoes of du Maurier’s Rebecca but Ruth Ware creates a tale that is very much anchored in the modern day, although this book has such an old-fashioned air about it that it comes as a surprise now and then when Hal pulls out her mobile phone or checks something out on Google.

You’ll never feel completely at ease while reading The Death of Mrs Westaway. Instead, Ware scatters sneaky kernels of doubt, meaning you’re forever mulling over the possibilities and that incessant yearning for the truth is always on the back burner as you read. As with The Lying Game, the author digs deep into the murk to uncover deception, lies and family secrets, in a compelling, creepy setting that has more than a tinge of the ghost story about it – probably best to have all the lights on as you read! Ruth Ware is a writer who is never afraid to tackle something a little different and in The Death of Mrs Westaway she’s really hit her stride. This is her best novel yet so go grab your copy right away.

Surprise bequests drive Vaseem Khan’s The Unexpected Inheritance of Inspector Chopra and House of Spines by Michael Malone, while Cornwall is also the setting in Martyn Waites’ latest, The Old Religion.