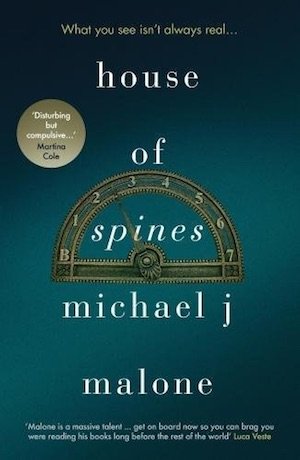 Written by Michael J Malone — Ran McGhie is six and three quarter years old. He wakes in the middle of the night to find his mother dancing in the garden. Although Ran knows his father will not be pleased he can’t help but go outside and for a few minutes the pair whirl around together, having fun. Then his father appears and the fun stops. Ran is sent back to bed and his mother is dealt with.

Now an adult and an orphan, Ran is sitting in the office of a lawyer named Quinn. To Ran’s complete surprise he’s been named the main beneficiary in the will of Alexander Fitzpatrick, a wealthy and recently deceased merchant. However, Ran has never heard of Fitzpatrick. It transpires Ran’s mother, Helen, was Fitzpatrick’s niece. She was cut off from the family when she met and fell in love with Gordon, an unemployed artist, and subsequently Ran’s father. Ran only knew his father as a bricklayer. What happened?

House of Spines is a thought provoking, at times disturbing, psychological thriller which attempts to get to the heart of mental illness and its impact on both the person suffering and the people around them. The story unfolds through Ran’s eyes, but often he is either on medication, which dulls his senses, or off the drugs and subject to the vagaries of his unstable mind.

Fitzpatrick has gifted Ran his house in Bearsden, on the edge of Glasgow, and all its contents along with a monthly payment sufficient to cover his costs. In return Ran must immediately move into Newton Hall and ensure the extensive collection of books in the library is maintained. Ran thinks he can sell the place and move on, but there’s a catch. The house is actually owned by a trust managed by the Fitzpatrick family and Quinn. Ran can use it for life and pass it on to his children, but he can’t sell it.

The trouble is Ran is divorced. He’s been unable to maintain a relationship longer than two years primarily because of his mental instability. It soon becomes clear that Fitzpatrick, when he was alive, kept an eye on Ran from afar and was fully aware of his situation.

Ran heads to his new home. It’s huge, set in extensive grounds. He meets Mr and Mrs Hackett, the caretakers who live on-site and looked after Fitzpatrick for years. Ran begins to look around and can’t believe his luck at obtaining such a magnificent house. But it’s all getting a bit much for him. His head spinning, he goes for a walk into the nearby village. In a café he meets an alluring young woman called Liz. Before he knows it he and Liz are back at the house and in bed together.

Later, Liz wakes up very spooked. She thinks she heard a voice, telling her to get out and saying Ran is hers. Liz leaves quickly. Ran explores Newton Hall some more and comes across an ancient lift, inside which is a mirror. He sees the reflection of a woman. Who was she and what does she want with Ran?

With the gothic undertones, a seemingly haunted house, and several voices from the past plus a clever plot in the present, House of Spines has plenty to pull you in. Are the family going to take what they believe is rightly theirs, and how exactly are they going to do it? Or, can Ran outwit them despite his inconsistencies?

There is one major plot twist that doesn’t hang together comfortably with the rest of an otherwise cleverly constructed book and it might leave you shaking your head. However, with an interesting set of characters and the spooky atmosphere Michael J Malone successfully creates House of Spines is a gripping page turner. I recommend you read this through your fingers with all the lights on!

We’ve previously reviewed some of Michael’s work including A Suitable Lie and Beyond the Rage. We also have an interview with the author here.