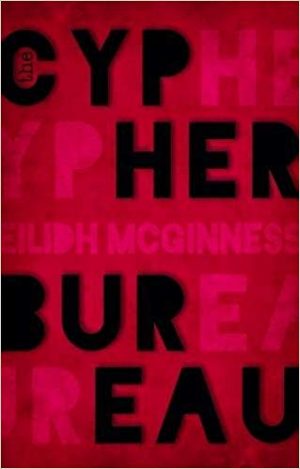 Written by Eilidh McGinness — Although readers around the world are familiar with the accomplishments of Alan Turing and the British code-breaking team at Bletchley Park – most recently popularized in the Benedict Cumberbatch movie, The Imitation Game – the substantial contribution of Polish mathematicians to the unraveling of the Nazis’ Enigma code is less well known. In The Cypher Bureau, Eilidh McGinness has written an exciting and forthright novelisation of the life of Polish mathematician Marian Rejewski and his colleagues, in an attempt to fill this historical blank spot.

As children, Rejewski and his two friends and fellow mathematicians, Henry Zygalski and Jerzy Rozycki, lived through the German occupation and depredations of World War I. Now, on the cusp of completing their university studies, war clouds are once again amassing on their country’s western border. Polish authorities, fully cognizant of the Nazis’ existential threat to their nation, are in search of expert minds who can expose the Germans’ secrets and help foil their plans. They find these three young men.

Rejewski, Zygalski, and Rozycki are successfully recruited to work for the Cypher Bureau, although the danger of such work as the Nazi invasion looms. They have successfully solved numerous important decryption problems, yet Rejewski longs for a chance to try cracking Enigma – the coding machine the Germans considered unbreakable. Finally, he gets this super-secret assignment. Thanks to documents obtained by French intelligence and the lucky acquisition of an Enigma machine, he is able to reconstruct its internal wiring. Once that is accomplished, the method for decoding messages on a given day becomes relatively simple.

The insight that allows his breakthrough is not mathematical or technical, it is psychological. Having had German tutors in his youth, Rejewski knows how they think, and he applies their mode of thought to understanding the master codes that change daily. As the author of the book on which The Imitation Game was based wrote, “They had not broken the machine, they had beaten the system.”

Once Germany invades Poland, the code-breaking team must flee, working its way across Europe, stopping briefly here and there to decode messages, deal with Germany’s increasing efforts to make Enigma more complex and, therefore, more secure, and making hair’s-breadth escapes from their pursuers. It is dangerous work, and they cannot be certain whom to trust. In that way, although this aims to be a true account and is never hyperbolic, it reads much like an action thriller.

What is abundantly clear is the author’s sincere respect for the bravery and the intellectual contributions of the Poles and a sense of the three mathematicians and the people around them as individuals. What’s also clear is the commitment of a great many people in Poland and France, especially, to keeping the secret of the cypher team’s accomplishments. Not one person ever revealed this information, and throughout the long years of the War, the Germans never knew they’d been hacked. This in itself is an astonishing feat.

Until rather recently, the Poles’ contribution to the penetration of Enigma’s secrets was rather overshadowed. Today, however, it is better-known, and this book, though a novel, should aid in helping Rejerski, Zygalski, Rozycki, and the Polish cypher team take their proper place in history.

If you like novels with a strong World War II setting, check out the titles by the late Philip Kerr or the accidental heroes created by Alan Furst.